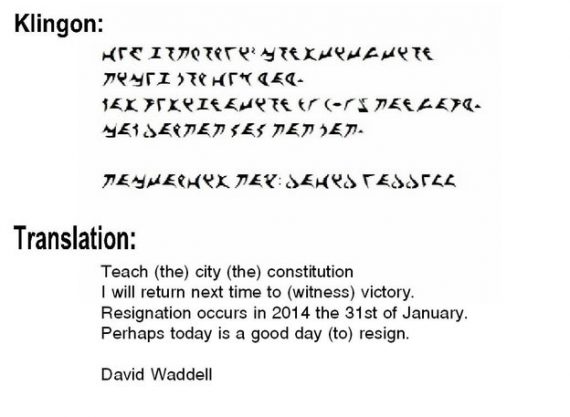 Apparently, for Indian Trail Councilman David Waddell, it was a good day to resign:

An Indian Trail councilman decided to boldly go where no politician has gone before – and tendered his resignation this week in the Klingon language.

Apparently David Waddell no longer wanted to live long and prosper on the board.

In an interview Thursday, Waddell said his resignation letter to Mayor Michael Alvarez was written in Klingon, the language of a proud warrior race in the “Star Trek” TV shows and movies, as an inside joke. But in case the mayor wasn’t up to speed with his Klingon, Waddell included a translation using Bing.com.

“Folks don’t know what to think of me half the time,” said Waddell, so “I might as well have one last laugh” on the board.

Waddell said he is resigning as of Jan. 31. He is in his first term on the board, and the four-year seat expires in December 2015.

He expressed frustration with what he saw as runaway development in the town as well as concerns with how requests for public information were being handled. In November, the counciltabled a plan to establish more fees for some public records and add more restrictions on how records could be viewed.

Waddell, a plumber, said he thought he would be more effective by coming to board meetings as a citizen and speaking out on issues. He said he also needed to devote time to mount a write-in campaign on the Constitution Party’s platform for Kay Hagan’s U.S. Senate seat.

No word on whether Waddell intends to host a farewell party. If he does, I suggest something involving the use of Klingon Pain Sticks, followed by a feast including Gagh and Heart of Targ.