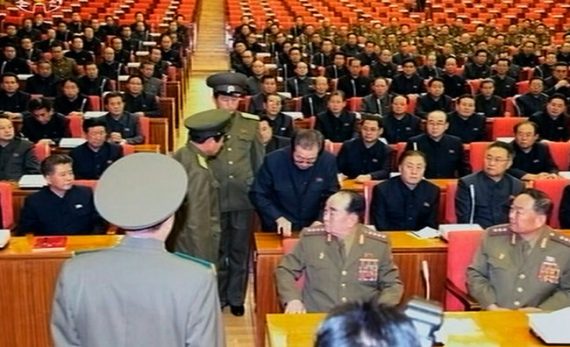 In a rare move, the North Korean government is talking openly about the removal of a top regime official:

SEOUL, South Korea — North Korea confirmed on Monday that Jang Song-thaek, the uncle of Kim Jong-un, the country’s top leader, had been stripped of all titles of power and expelled from the ruling Workers’ Party of Korea. Mr. Jang is the most prominent figure to be purged since Mr. Kim took power two years ago.

Moving swiftly to consolidate his authority, Mr. Kim presided over an extended meeting of the Political Bureau of the Party Central Committee on Sunday, which formalized the sidelining of Mr. Jang, 67, who had been considered the second most powerful person in North Korea after Mr. Kim.

A number of Mr. Jang’s associates also were purged, according to a lengthy report by the state-run Korea Central News Agency, which called them “a modern-day faction” and “undesirable elements who happened to worm their ways into our party ranks.” Mr. Jang and his “group” were accused of committing “such anti-party, counterrevolutionary factional acts as expanding their forces through factional moves” and “attempting to undermine the unitary leadership of the party.”

South Korean intelligence officials said the language in the report was a signal that Mr. Kim, who is 30, was uprooting a wide network of protégés Mr. Jang had placed in party and military posts, and doing it in a way that was meant to send a strong signal to others in the country’s elite that he is firmly in charge. The report said that other Central Committee members, representatives from provincial party committees and the People’s Army attended the meeting as observers.

Mr. Kim’s two years in power have been marked by a series of demotions, promotions and purges of top party and military figures, a tactic that was also used by his two predecessors — Kim Jong-il, his father and Mr. Jang’s brother in law, and Kim Il-sung, Mr. Kim’s grandfather and the founding president of North Korea. But it is highly unusual for the country to publicize its internal political machinations by holding an extended party meeting and announcing its results publicly.

The Korean news report said that speakers at the meeting criticized the Jang group “in unison” and “expressed their firm resolution to remain true to the idea and leadership of Kim Jong-un.” Anyone who impedes his authority will never be pardoned, “regardless of his or her position and merits,” it said.

Mr. Jang and his wife, Kim Kyong-hee, Kim Jong-il’s sister, were widely thought to be acting as regents for their nephew, helping him establish his leadership after Kim Jong-il’s death in December 2011. Mr. Jang held a series of influential titles in agencies of power headed by Mr. Kim, including a seat on the Political Bureau and vice chairmanships of the Central Military Commission and the top government organ, the National Defense Commission.

I wrote about this removal last week, but this is the first time there’s been any confirmation of the events from Pyonyang. Indeed, the photograph above is, supposedly, of Jang being forcibly removed from a committee meeting by armed guards although its unclear when the photograph was taken, where Jang was taken, or even whether he is still alive. Meanwhile, the official state news agency detailed the charges against him:

Gnawing at the unity and cohesion of the party and disturbing the work for establishing the party unitary leadership system and perpetrated such ant-state, unpopular crimes as doing enormous harm to the efforts to build a thriving nation and improve the standard of people’s living.

Jang pretended to uphold the party and leader but was engrossed in such factional acts as dreaming different dreams and involving himself in double-dealing behind the scene.

Affected by the capitalist way of living, Jang committed irregularities and corruption and led a dissolute and depraved life.

By abusing his power, he was engrossed in irregularities and corruption, had improper relations with several women and was wined and dined at back parlors of deluxe restaurants.

Ideologically sick and extremely idle and easy-going, he used drugs and squandered foreign currency at casinos while he was receiving medical treatment in a foreign country under the care of the party.

(Translation via The Wire)

In  other words, his “crime” was acting like any other member of the party inner circle. These are trumped up charges, of course, and this is quite obviously an effort by Kim to consolidate his own power and push a potential rival aside. Whether it is the beginning of a series of further purges, and what that might mean for the North’s relationship with the rest of the world, is something only time will tell. 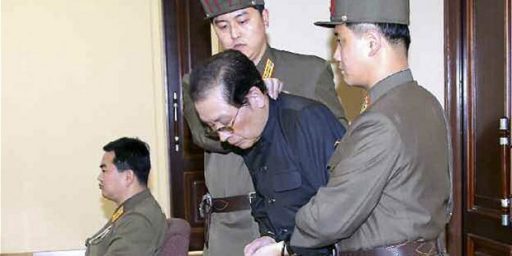