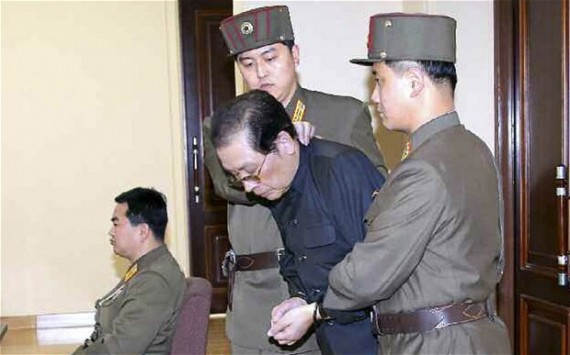 Reports out of North Korea are indicating that pretty much all of the living direct relatives of Jang Song Thaek, the uncle to Kim Jong Un who was executed some time late in 2013, have been put to death:

North Korea has reportedly put to death all direct relatives of the uncle of leader Kim Jong-Un, Jang Song-thaek, who was executed last month for “attempting to overthrow the state”.

Children were among those killed on Mr Kim’s instructions, as were North Korea’s ambassadors to Cuba and Malaysia, the South Korean news agency Yonhap reported, citing multiple sources.

“Extensive executions have been carried out for relatives of Jang Song-thaek,” one source told Yonhap on condition of anonymity.

“All relatives of Jang have been put to death, including even children.”

The relatives, who were reportedly recalled to Pyongyang in early December and executed, include Jang’s sister Jang Kye-sun, her husband Jon Yong-jin, the ambassador to Cuba, and the ambassador to Malaysia Jang Yong-chol, who is a nephew of Jang, as well as his two sons.

The sons, daughters and even grandchildren of Jang’s two brothers were also executed, Yonhap reported, adding that it was unclear exactly when they were put to death.

“Some relatives were shot to death by pistol in front of other people if they resisted while being dragged out of their apartment homes,” the news agency said, citing a source.

Relatives by marriage, including the ambassador to Cuba’s wife, were spared and sent to remote villages along with their maiden families, a source reportedly said.

Also missing from the list is  Kim Kyong-hui, Jang’s wife and the sister of Kim’s father Kim Jong Il. She seems to have survived this purge, although admittedly a public announcement that a direct descendant of the country’s founder and sister of its second leader had been involved in alleged treachery may not be something that the regime would want to publicize. At the very least this report, if true, would seem to indicate that any hope that the rise of a younger Kim would bring about change in North Korea was naive to say the least.