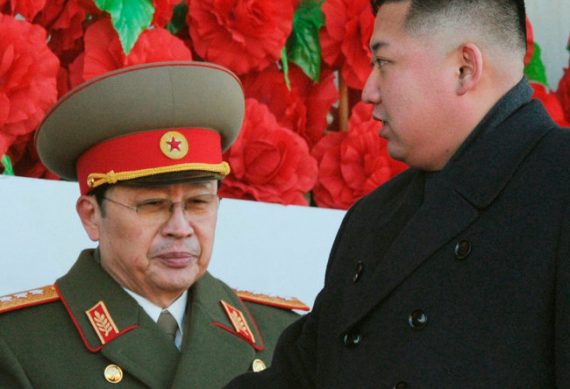 One of the most powerful members of Kim Jong Un’s inner circle has been stripped of power:

SEOUL, South Korea — Jang Song-thaek, an uncle of the North Korean leader Kim Jong-un and a man widely considered to be No. 2 in the Pyongyang government, has been dismissed from all posts of influence, the National Intelligence Service of South Korea told Parliament on Tuesday.

Mr. Jang’s downfall follows the executions of his two deputies last month at the administrative department of the ruling Workers’ Party of Korea on charges of “corruption and anti-party activities,” according to lawmakers who were briefed by intelligence officials in a hurriedly scheduled meeting at the National Assembly. The South Korean intelligence agency did not reveal how it learned of the executions, the lawmakers said.

Mr. Jang, 67, has been a mentor to his nephew as well as a fixture in the North Korean power elite since the days of Mr. Kim’s father, Kim Jong-il, exercising his widespread influence from the party’s administrative department, which he led. He is the husband of Kim Kyong-hee, the beloved sister of Kim Jong-il and an aunt of the current leader.

Mr. Jang and his wife emerged as key brokers of power in the reclusive North Korean regime after Kim Jong-il suffered a stroke in 2008. They played leading roles in engineering the fast-track grooming of Kim Jong-un as designated heir, analysts said. Following Kim Jong-il’s death in late 2011, the couple then helped their nephew consolidate power through a series of purges that replaced 44 percent of top officials in the party, military and cabinet.

But Mr. Jang’s seemingly unbridled influence has also prompted outside analysts to speculate that Mr. Kim would eventually see him as a potential challenge to his authority. They said Mr. Kim had moved to weaken the broad network Mr. Jang built while the government was going through a transition in the past two years. On Sunday, the main party daily, Rodong Sinmun, the North’s key propaganda tool, exhorted North Koreans to thoroughly establish the “monolithic leadership of Kim Jong-un” and “follow him to the end of the world.”

Jeong Cheong-rae, a lawmaker affiliated with the opposition Democratic Party in South Korea, said: “The intelligence agency gave us an unexpected briefing, saying that they had something urgent to report about a development of great import in North Korea. They said they believed that Jang Song-thaek had fallen from power.”

It remained unclear whether Mr. Jang had just lost jobs or had also been incarcerated. Mr. Jang is estranged from his ailing wife, according to reports in the South Korean media.

Mr. Jang has not been seen in the North Korean news media since Nov. 6, when he received Kanji Inoki, a former professional wrestler turned politician from Japan, in his capacity as North Korea’s top sports official. A public appearance together with Kim Jong-un, a big sign that an official is favored by Mr. Kim, was last awarded to Mr. Jang on Oct. 10, the party’s anniversary.

The number of Mr. Jang’s appearances with Mr. Kim in North Korean news media fell to 52 so far this year from 106 last year, according to the Unification Ministry of South Korea.

The sudden toppling of Mr. Jang was likely to unleash a shake-up of the power structure in Pyongyang, analysts here said.

The regime propagated the news of the executions of Mr. Jang’s two deputies, Ri Yong-ha and Jang Su-gil, to the military and other elites while stepping up ideological education aimed at increasing loyalty to Kim Jong-un, said Cho Won-jin, a lawmaker belonging to the governing Saenuri Party of South Korea who attended an intelligence briefing on Tuesday.

As noted above, the idea that the young Kim would eventually try to push his Uncle aside has been floating around ever since he succeeded to power after his father’s death, so this doesn’t come as much of a surprise. However, most North Korean analysts agreed that Kim needed his support in the begining to establish his credibility with the North Korean military and the party infrastructure, especially given the fact that he is was so young and relatively inexperienced when he came to power. Having Jang by his side arguably acted to both reassure the rest of the power structure and ensure that others would not move against him in the early days of his leadership. While reading Pyongyang is always hard, this move would seem to indicate that the third member of the Kim dynasty now feels secure enough in his own power to no longer need Jang as a backup or potential rival for power. What the rest of it means for the future is something I’m not going to speak to, except to note that it’s just another example of how unpredictable Pyongyang can be to outsiders.

It’s unclear if this move is connected in some way to the detention of 85 year-old American Merrill Newman or whatever that might be related to, although there has been some speculation that the North Koreans may be holding Newman as part of yet another attempt to force the United States and South Korea to enter into negotiations for what would effectively be a formal end to the state of war that was created when the North invaded the South in June 1950. As with everything North Korean, we’ll just have to wait and see.