The bromance between President Obama and New Jersey Governor Chris Christie has now become a love triangle with the addition of Bruce Springsteen. 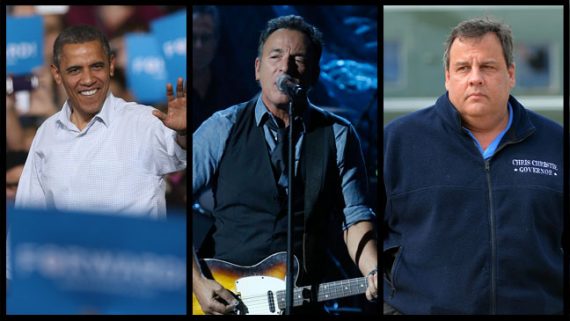 The bromance between President Obama and New Jersey Governor Chris Christie has now become a love triangle with the addition of Bruce Springsteen.

WaPo (“Christie: Hug from Springsteen made me weep“):

New Jersey Gov. Chris Christie told reporters Monday that he had an unexpected — and moving — conversation earlier with his hero, Bruce Springsteen.

He also got a hug from the rock legend on Friday, at a benefit concert for victims of Superstorm Sandy. He later cried, calling the moment a highlight in a tough week.

“Bruce and I had an opportunity to chat for a while Friday night… we hugged and he told me, ‘it’s official, we’re friends,” Christie said at a news briefing.

President Obama was on the phone with the Republican governor Monday, discussing storm damage, when he briefly handed the line over to Springsteen. The rock legend is traveling on Air Force One as he campaigns for the president.

Before the storm Springsteen refused to acknowledge Christie, whose budget cuts he has criticized. But in the wake of the disaster, which hit the Jersey Shore particularly hard, he has started to embrace his ardent fan.