To the surprise of virtually no one, Barack Obama has won the Mississippi Democratic primary, the last contest before Pennsylvania’s primaries in late April. To even less surprise, presumptive Republican nominee John McCain also prevailed in his party’s contest.

Perhaps more interesting than the primary victory are the exit poll numbers, which may suggest some serious problems for the Democrats if Clinton does emerge to be the eventual nominee. For starters, only 51% of Democratic primary voters said that Clinton was “honest and trustworthy” — and, even among that group, Clinton only prevailed 55-44%:

As in Texas, Clinton may also have benefitted from the “Limbaugh effect”: her support in the primary clearly came from conservatives in the Magnolia State, who are unlikely to vote for any Democratic nominee when November rolls around: These exit poll fundamentals put aside the numbers that have attracted the most attention among the commentariat:

UPDATE (James Joyner): It’s a little early in the morning for math but I’m at a loss as to how Clinton won did as well as she did. Her margins with conservatives of 14 and 10 percent are smaller than Obama’s with liberals of 44 and 28 and even his 19 percent among moderates. Either the exit polls are not reflective of the actual vote or conservatives absolutely dominated the turnout. 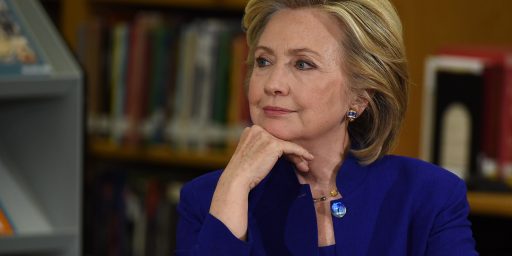 The Race For The Democratic Nomination Isn’t Over Yet, But It’s Getting Close To That