Recall the flap over Arizona State’s refusal to award President Obama an honorary doctorate? He handled it quite nicely. President Barack Obama says Arizona State University officials aren’t the only ones who think he needs to accomplish more to earn an honorary degree. Add his wife Michelle to that list.

“I come here not to dispute the suggestion that I haven’t yet achieved enough in my life,” Obama said in a commencement speech Wednesday. With a smile he added: “First of all, (first lady) Michelle (Obama) concurs with that assessment. She has a long list of things that I have not yet done waiting for me when I get home.” “But more than that I come to embrace the notion that I haven’t done enough in my life. I heartily concur. I come to affirm that one’s title, even a title like ‘president of the United States,’ says very little about how well one’s life has been led.”

Obama challenged the graduating class to find new sources of energy, improve failing schools and never to rely on past achievement. He congratulated them on earning a degree, and said the next steps mattered more than a piece of paper or a tassel. “I want to say to you today, graduates, class of 2009, that despite having achieved a remarkable milestone in your life — despite the fact that you and your families are so rightfully proud — you, too, cannot rest on your laurels. … Your own body of work is also yet to come,” the president said, wearing a black gown with red embellishments and a blue hood.

Not only was this a graceful way of handling an awkward situation but it’s good advice. Well played. 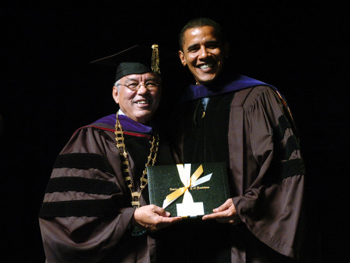