One World Trade Center Gets Its Spire 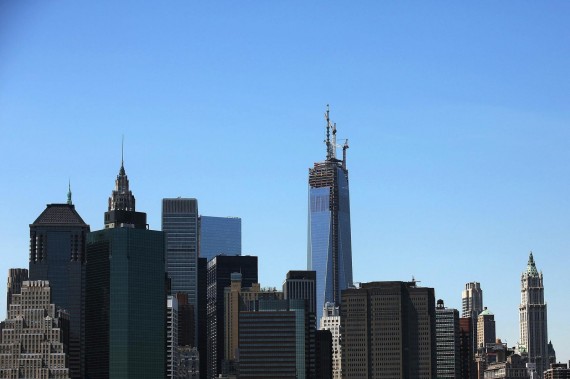 The soon-to-be tallest building in North America had the spire that will top it moved to the roof today:

Construction crews on Thursday hoisted the final segment of spire that will top One World Trade Center and complete a piece of the New York City skyline missing since the 9/11 terror attacks.

A crane guided the final piece into a temporary structure that will house the section until final installation by iron workers at a later date.

Once installed, the spire — weighing more than 700 tons — will crown the Freedom Tower at 1,776 feet, making it the tallest building in the Western Hemisphere, according to the Port Authority of New York and New Jersey. The building currently tops out at 1,368 feet.

“It’s a big milestone in the history of the rebirth of the site,” Daniels told NBC News. “This renewal of spirit, to see spring here and this beautiful weather, the memorial fountains and the flag on the spire piece going up. It was one of those things that you won’t forget.”

By chance, the hoisting fell exactly two years after Navy SEALS shot and killed Osama Bin Laden, the mastermind behind the terror attacks that demolished the two World Trade Center towers and killed thousands of Americans.

“To have the One World Trade Center spire happen today — it feels poetic, and it feels like poetic justice,” Daniels said.

Indeed, it is. Once the spire is permanently attached to the structure, the building will officially measure an appropriate 1,776 feet.