The Truck Whisperer Edition OTB Caption ContestTM is now over.

The Truck Whisperer Edition OTB Caption ContestTM is now over. 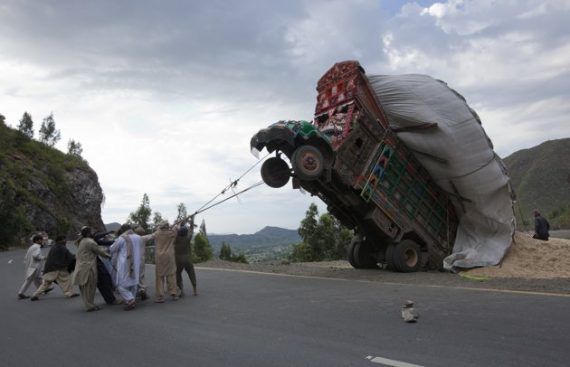 First: Fog – One simply does not ask Chris Christie to move to the back of the bus.

Third: Stormy Dragon – Several local villagers helped the Electric Mayhem get the tour bus back onto the road.

John Burgess – The attempt for a Guinness World Record chapati ran into some unexpected difficulties.

Herb – In an attempt to recreate the cover for Led Zeppelin I, Dargai’s airship industry crashes before it even gets off the ground.

fustian – According to Keynes, we need to keep adding lots more weight right on top and then it’s just come flying out of there…

The new Methane powered bus, with the passenger gas reclamation system, proved quite popular in third world countries… whose sustenance was primarily beans.

…if automobiles were designed by Congress.

Keynes and the Long Run