The Hunt For Red November 6th Edition OTB Caption ContestTM is now over.

The Hunt For Red November 6th Edition OTB Caption ContestTM is now over. 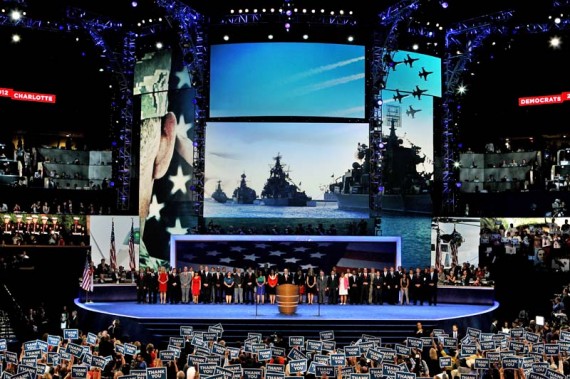 First: Jc – “Hallo, customer service, dis is Peggy, did you get dee slides?” ” We put a Russian on them, so they get there quick.”

Second: CSK – The Village People Reunion Tour proved to be THE highlight of the convention.

Third: JKB – I am Vladimir Putin And I approve of this message

John Burgess – “Jeeze! That photo wasn’t supposed to appear until after the Inauguration!”

Michael Hamm – Due to the rich not paying their “Fair Share”, Obama announces that the Russian military will take over protecting the United States.

Al – “Guys, we’ve really got to shut down the Battlefield 3 tournament. The convention was supposed to start five hours ago.”

Donald sensing – “So the audiovisual intern simply clicked the ‘lucky’ button and this is what came up. It’s Google’s fault.”

Herb – No more than ten to twenty million killed. Tops.

“No Mr. President, its a warning shot across the bow, not just bowing to them, as a warning.”

“Don’t the Russians have a right to celebrate their war prowess with a flotilla parade?”
“…but in the Potomac, Mr. President”

The Thursday Contest is an old elephant trying new tricks.