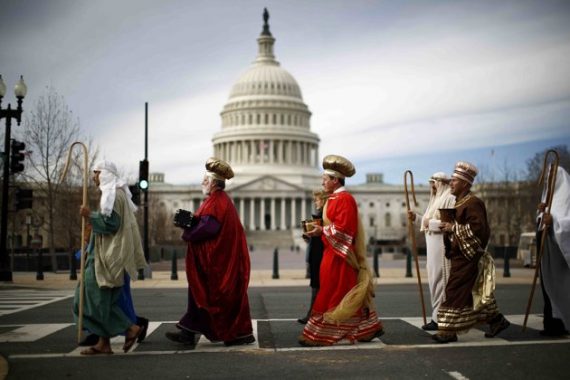 First: Doug Mataconis – Despite what appeared to be photographic evidence, most Americans refused to believe that there were wise men in Washington, D.C. (…an obvious photoshop – rodney)

Second: Stonetools – “We three kings of lobbying are, Bearing gifts, we travel afar”

Third: OzarkHillbilly – “Quick! Before Congress wants our gold, our frankincense, our myrrh.” “Never mind that other stuff, just get the gold.” “Yeah, they got a pretty good sense of Franken, and nobody knows what myrrh is.”

markm – Fourth guy in line: “So I just had an idea…popcorn you make at home. I will call it Jiffy Pop. It will be popcorn kernals with oil in a foil pan and as it pops, it fills up a gold foil ball……”

Tillman – Balthazar looked back at the other two in frustration, and silently swore to never fly Air India again.

jd – I’m sure we left the camels tied to one of these posts.

Hal 10000 – The three wise men return home in disappointment after realizing the “star” they follow was the incandescent blaze of 536 bloated egos.

MstrB – Notice the lack of members of congress

Proof that you don’t need automatic weapons to protect yourself in DC, just a wicked left or right hook.

We three Kings minorities are, bearing gifts bought with your taxes thus far.

The Thursday Contest is already hanging ten… and beheading three others….