The OPA! Edition OTB Caption ContestTM is now over.

The OPA! Edition OTB Caption ContestTM is now over. 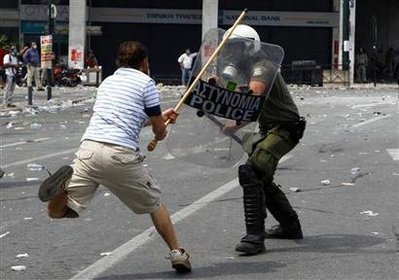 First: John Burgess – Who knew the Canucks had fans in Greece?

Second: FormerHostage – “Polling” has a different context in Greece.

Third: Maggie Mama – Greek pole vaulters grab some practice whenever they can.

Donald Sensing – “Man, this is the severest drunk-driving test I’ve ever taken!”

Greg – Shocked that his lightsaber could not slice through the riot shield, Stavros suddenly remembered he was not actually a Jedi.

MstrB – Petros reaches the final stages of getting approval for Canadian Immigration.

Either Pirate, or Ninja, Edmund was losing.

The Monday Contest is still away.