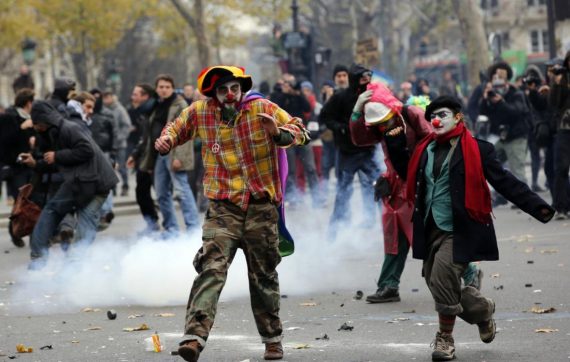 First: Franklin – The Tear Gas of a Clown (performed by “Smokey” Robinson, of course)

Second: markm – Camera guy: “hey clown, you’re really funny.” Clown: “You mean, let me understand this cause, ya know maybe it’s me, I’m a little phucked up maybe, but I’m funny how, I mean funny like I’m a clown, I amuse you? I make you laugh, I’m here to phuckin’ amuse you? What do you mean funny, funny how? How am I funny?”

OzarkHillbilly – The French respond to the ISIS attacks.

Paul Hooson – Apparently, French police have not foiled all of the terrorists yet. The French mimes remain free to roam the streets….

Jeron – Armed only with clown noses, they set about to change the world one laugh at a time!

CSK – Donald Trump and his campaign manager really go all out to attract the buffoon vote.

If I fart… does it smell funny?

Nobody will shoot me… A mime is a terrible think to waste.

Though skilled space assassins Bozo and Harpo Fett were relegated to Jar-Jar Binks status with the fans..