The A Fish Called Wanna (Be President) Edition OTB Caption ContestTM is now over.

The A Fish Called Wanna (Be President) Edition OTB Caption ContestTM is now over. 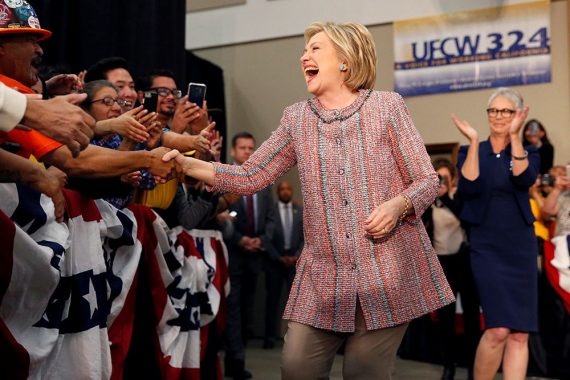 First: Paul Hooson – The next contestant on WHO WANTS TO BE INDICTED? (brought to you by the people who gave you “Name That Cough” – rodney)

Second: Mu – Yes, I hand knitted it while my lawyers argued with the FBI investigators.

Moosebreath – It takes a village to hand-weave this jacket.

Franklin – Shout out to my new sponsors, JoAnn Fabrics!

john430 – Oh Jeez! Hillary is campaigning on the Gong Show.

RockTHisTown – In preparation for being broke when she leaves the White House, Hillary introduces a new line of sniper-fire proof sweaters. (Duck and Weave – rodney)

edmondo – Yeah, it’s ugly but functional, I can carry Debbie Wasserman Shultz in my back pocket.

“My Colorado constituents hand wove this jacket… but it does have a funny smell to it… and I’m hungry for Doritos.”

Who woulda thunk that the United Foundation of Cankled Women had so many chapters.