The Speak Softly and Carry A Ghundi Edition OTB Caption ContestTM is now over.

The Speak Softly and Carry A Ghundi Edition OTB Caption ContestTM is now over. 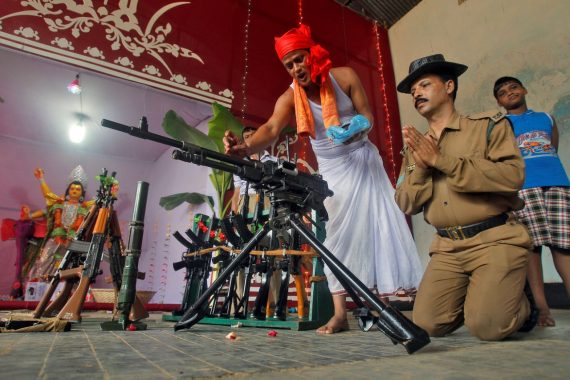 First: john430 – Indian at prayer: “Thank you O Shiva. Thou hast heard my prayers. A .50 caliber Gandhi Peacemaker for my very own.”

Second: Tony W – The NRA’s international wing is starting to gain support as countries around the world strive to be more ‘Murican.’

Third: Franklin – In a world of blessed weaponry, Raoul was not about to be outdone by the Holy Hand Grenade of Antioch …

@debitking – A cowboy and his ugly wife bless their new kitchen appliance.

Moosebreath – Klinger: Dr. Freedman, how did we get into a combat unit?

barbintheboonies – Bless you daddy, this is just the thing I`ve been praying for.

al-Alameda – from the annual NRA performance of “Streetcar Named Desire”

RockThisTown – O Great one, we ask that you bless this weapon,
And although the finish isn’t camo,
We ask that You watch over us,
And make sure we have plenty of ammo.

“Now all I need it the Illudium Pu36 Explosive Space Modulator.”

“You’re having your gun blest? I thought Buddhists were pacifists?”
“I didn’t say I was a good Buddhist.”