The Jangled Bells Edition OTB Caption ContestTM is now over.

The Jangled Bells Edition OTB Caption ContestTM is now over. 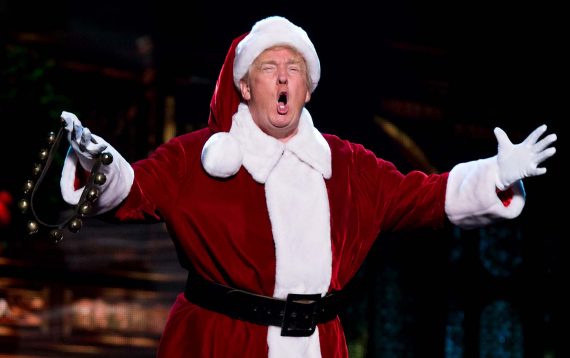 First: CSK – No one expected the remake of ‘Bad Santa’ to be quite so literal.

Second: Doug Mataconis – New on Broadway just in time for the holiday season “How The Trump Stole Christmas”

RockThisTown – “Wait until you see my grab bag!”

Jc – Jingle bells, jingle bells, send the girls my way. Oh what fun, it is to grab them by the Pooo-ooo-say.

Tony W – Little known fact, his Santa suit is made from the dyed-red fur of over 100 dalmatians.

CAROL OF THE HELLS AWARD

Hal_10000 –
You’d better watch out
Better check your fly
Cover your crotch, I’m telling you why
Santa Trump is coming to town.

Making enemies lists
checking ’em twice
Gonna find out who gets deported by ICE
Santa Trump is coming to town.

He sees you when you’re changing
Your privacy he will take
He now controls the NSA
So be loyal for your own sake.

Oh, we need to watch out
We’ll need a good cry
It’s a four year pout
I’m telling you why.
Santa Trump is coming to town.

Santa Trump was taken aback when Lady Gaga came out in her pussy costume… and I don’t mean feline.