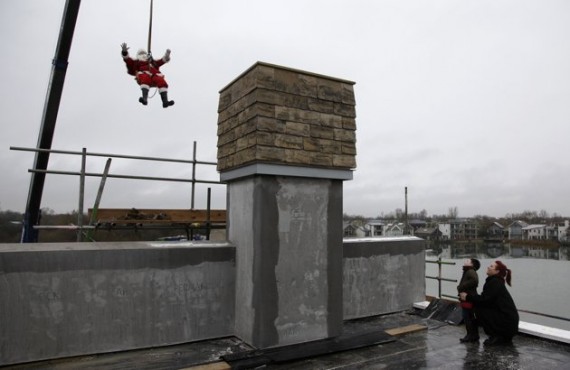 First: Herb – I’m Johnny Knoxville and this is the Bungee Santa.

Second: G.A.Phillips – I don’t believe in Santa or alien abductions…

Debitking – OMG! The war on Christmas has come to this!? They just hung Santa Claus.

Maggie Mama – See, I told you that PETA convinced Santa to free his reindeer from “animal slavery”!

Gollum – “No mythical personalities were harmed in the filming of this caption contest.”

mannning – How to destroy the Santa myth with one act for all to see: daytime chimney insertion, no sled, no reindeer, no presents, plenty of witnesses, and an assist from a crane and its operator.

PeterOly – Unable to afford the carbon credits to offset all those reindeer farts, Santa is reduced to hiring union crane operators. Productivity drops and costs rise even as Christmas is rescheduled for mid-April.

The finnish space program didn’t experience any difficulties until they tried to mount the payload.

The real story behind the SEAL Team Six insertion revealed.

The Monday Contest is planning an all out assault on Christmas.