The Orange Crush Edition OTB Caption ContestTM is now over.

The Orange Crush Edition OTB Caption ContestTM is now over. 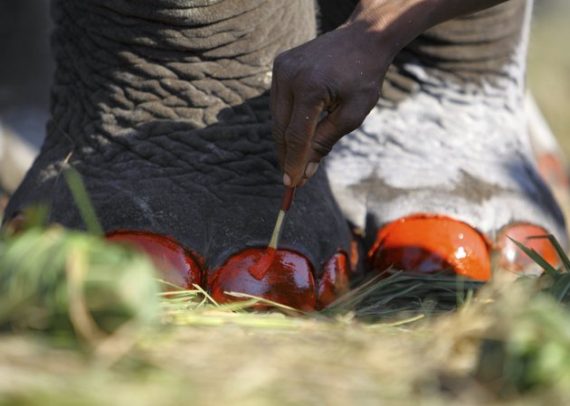 First: jd – You know Santorum’s going to be there, too, right?… Right?

Third: Jeremy Sarber – The GOP believes they have finally found a way to revamp their image and attract voters.

steve – Poli sci class demonstrates that putting nail polish on an elephant makes the GOP mascot just as attractive as the current field of presidential candidates.

LorgSkyegon- Tired of the flack she was getting for having professional pedicures every week, Hillary Clinton tries doing it herself

John Burgess – Tip-toeing through the tulips… it’s not just for the svelte!

Donald Sensing – Q: Why do elephants paint their toenails red? A: To hide in a strawberry patch.
Q: Have you ever seen an elephant in strawberry patch? A: No, which proves it works!

Santorum had problems with the direction the new GOP was taking.

Horton continues to show his more sensitive side.

“Maybe putting lipstick on a Pitbull was a better idea.”

The end of DADT lead to some unexpected results within the GOP.

Preparations for doing the Tebow.