The Employer In Chief Edition OTB Caption ContestTM is now over.

The Employer In Chief Edition OTB Caption ContestTM is now over. 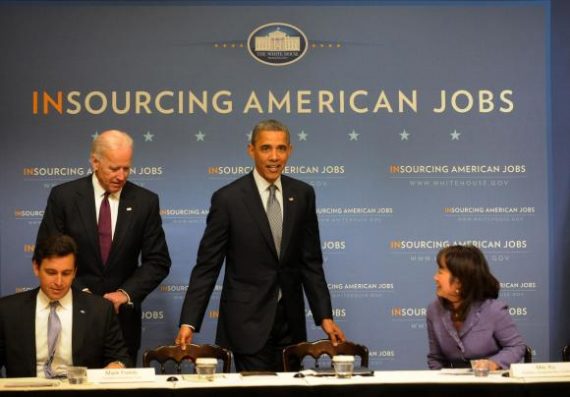 First: David – Are those shoes Italian?

Third: LorgSkeygon – Waiting intently for the big moment, Biden is thrilled that Obama has yet to see the whoopie cushion.

Maggie Mama – Definition “insourcing” – Creating more jobs ‘IN” government to reduce the unemployment numbers so Obama can be reelected again thanks to an ignorant population and a liberal media.

Gromitt Gunn – “…and this is how you play musical chairs, Chicago-style.”

Dodd – “I wonder if I should tell Barack that I can see the puppeteer’s hand?”

John425 – Obama: “Hello, and welcome! We’re from the government and we’re here to help you.”

“Yes, I put the SuperGlue on Joe’s chair…. He’s standing right behind me isn’t he?”

“Oh, I thought InSource was a company like Solyndra.”

“We have enough illegal immigrant labor, to take on all the jobs Americans don’t want to do, right here.”

“‘Cause we already know how to say, ‘You want fries with that?’”

Buffet Rule: The President and VP are the first up to the lunch buffet.

The Thursday Contest has already cornered the market on Helium.