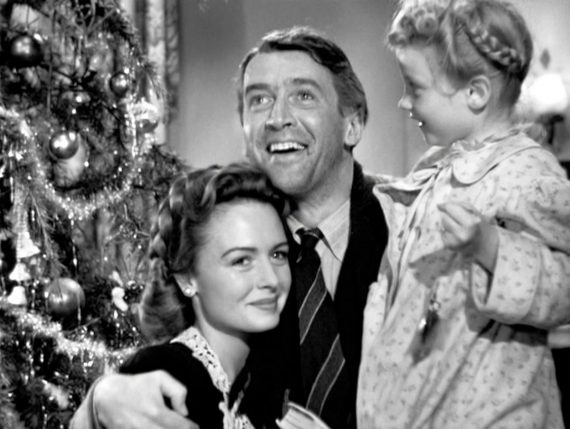 Paramount Pictures is putting a quick halt to that talk about a sequel to It’s A Wonderful Life:

The announced It’s a Wonderful Life sequel isn’t sounding too wonderful to Paramount.

Derrik J. Lang of the Associated Press reported that the studio said that it would fight the proposed sequel to the film titled It’s a Wonderful Life: The Rest of the Story that Variety reported was in the works earlier this week. The sequel, which would feature the grandson of Jimmy Stewart’s character in the 1946 film, is being financed by Allen J. Schwalb and Bob Farnsworth  of Hummingbird Productions, the latter of whom co-wrote the screenplay.

But the studio said that they do not have the appropriate rights. ”No project relating to It’s A Wonderful Life can proceed without a license from Paramount,” Paramount said in a statement. “To date, these individuals have not obtained any of the necessary rights, and we would take all appropriate steps to protect those rights.” Paramount has controlled the rights for the past 14 years, Lang noted.

Actually, the question of the rights to the movie is a bit more complicated than that:

It’s a Wonderful Life entered the public domain by accident. In 1946, when the movie was filmed, U.S. copyright protection lasted 28 years and could be renewed for another 28 years by filing some paperwork and paying a nominal fee. However, Republic Pictures, the original copyright owner and producer of It’s a Wonderful Life, neglected to renew the 1946 copyright in 1974. So, the film entered the public domain. Though a box office flop on release, it became immensely popular on television thanks to repeated showings: Stations programmed it heavily during the holidays, paying no royalties to its producers, and more than 100 distributors sold the movie on tape.

Republic regained control of the lucrative property in 1993 by flexing a new Supreme Court ruling that determined that the holder of a copyright to a story from which a movie was made had certain property rights over the movie itself. Since Republic still owned the copyrighted story behind It’s a Wonderful Lifeand had also purchased exclusive rights to the movie’s copyrighted music, it was able to essentially yank the movie out of the public domain: It claimed that since Wonderful Life relied on these copyrighted works, the film could no longer be shown without the studio’s blessing. (Technically, the film itself is not copyrighted. One could hypothetically replace the music, rearrange the footage, and sell or show the new product—but no one has done this.) In 1994, Republic* signed a “long-term” deal granting NBC exclusive rights to broadcast the movie, and the network typically does so between one and three times a year.

To what extent this means that Paramount, which has succeeded to Republic’s ownership rights, has the right to control the creation of a sequel may not be entirely clear, but it’s likely that they do have some ability hear to prevent this from happening. At the very least, one could be assured that there would be some extensive litigation on the issue, and in that kind of fight I’d bet on Paramount before I’d bet on a couple guys who’ve never made a movie before.

H/T to OTB reader Scott O. for the link on the original movie’s copyright history.