Paul Ryan pointed to a shuttered GM plant in his hometown as proof of Obama's failed policies. The truth will make your head hurt. 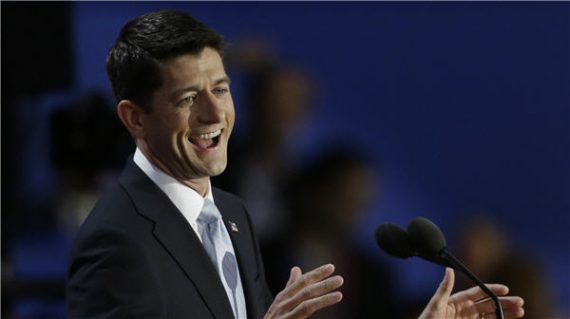 In his acceptance speech last night, Paul Ryan pointed to a shuttered GM plant in his hometown as proof of Obama’s failed policies.

President Barack Obama came to office during an economic crisis, as he has reminded us a time or two.  Those were very tough days, and any fair measure of his record has to take that into account.  My home state voted for President Obama. When he talked about change, many people liked the sound of it, especially in Janesville, where we were about to lose a major factory.

A lot of guys I went to high school with worked at that GM plant. Right there at that plant, candidate Obama said: “I believe that if our government is there to support you … this plant will be here for another hundred years.”  That’s what he said in 2008.

Well, as it turned out, that plant didn’t last another year.  It is locked up and empty to this day.  And that’s how it is in so many towns today, where the recovery that was promised is nowhere in sight.

Even on its own terms, I don’t see how this makes the case for firing Obama and hiring Ryan. My instant reaction, via Twitter: “A plant in the district I represent in Congress is closed. I blame Obama. WTF?”

But Ryan has apparently used this anecdote before, because the pushback was immediate. Ana Marie Cox retweeted me and Markos Moulitsas responded, “It closed in 2008. Under Bush.”

Glenn Kesslerquickly got up a “fact check” titled “Ryan misleads on GM plant closing in hometown.”

In his acceptance speech, GOP Vice presidential nominee Paul Ryan appeared to suggest that President Obama was responsible for the closing of a GM plant in Ryan’s hometown of Janesville, Wisc.

That’s not true. The plant was closed in December, 2008, before Obama was sworn in. But look how Ryan came close to the line in his speech:

“Right there at that plant, candidate Obama said: ‘I believe that if our government is there to support you … this plant will be here for another hundred years.’ That’s what he said in 2008. Well, as it turned out, that plant didn’t last another year. It is locked up and empty to this day.”

Obama gave his speech in February, 2008, and he did say those words. But Ryan’s phrasing, referring to the fact the plant did not last another year, certainly suggests it closed in 2009, when Obama was president.

It’s actually more complicated than that, though. A September 2011 piece in the Milwaukee Journal Sentinel (“GM Janesville plant still on standby“) explains:

General Motors Co. has committed to reopen its idled plant in Spring Hill, Tenn., and keep its shuttered assembly plant in Janesville on standby status.

The commitment to the former Saturn plant in Tennessee was part of a contract settlement reached late last week between GM and the United Auto Workers union.

Since they were shut down in 2009, both the Janesville and Tennessee plants have been on standby status, meaning they were not producing vehicles, but they were not completely shut down.

And it likely will continue into May, when the lights finally go off in the facility that has been producing vehicles since 1923.

Orphaned by the loss of its big brother in December, the Isuzu line and its 50 or so hourly and salaried employees continue to build about 25 trucks four days a week in what has become a nearly empty plant.

The Isuzu line is operating in the north end of the 4.8 million-square-foot plant, an area that was once the plant’s tire building.

So, Ryan was telling the truth and the fact checkers are wrong, right? Well . . . technically.  Obama said what he said Obama said. And the plant closed down after Obama took office—so Kos and Kessler are wrong. But only technically. As PolitiFact points out, “The plant was effectively shut down on Dec. 23, 2008, when GM ceased production of SUVs there and laid off 1,200 workers.” The add, “(Several dozen workers stayed on another four months to finish an order of small- to medium-duty trucks for Isuzu Motors.)”  I’d say that, yes, going from 1250 workers to 50 workers constitutes being “effectively shut down.”

More importantly, though, Ryan hewed to the letter of the truth while implying a something less than true. As the PolitiFact piece notes, in an earlier version of the story on the stump back on August 16, Ryan said, “I remember President Obama visiting it when he was first running, saying he’ll keep that plant open. One more broken promise.” But, of course, “I believe . . . this plant will be here for another hundred years” isn’t a promise to keep the plant open; it’s a statement of a hoped for outcome. It’s quite possible that Ryan and his speechwriters remembered it as a promise—I gather that contemporaneous newspaper editorials took it that way—and he’s stopped using that language after having Obama’s exact words pointed out to him. But the story doesn’t make any sense as an attack on Obama unless the audience perceives it to be a promise; while Ryan doesn’t actually say Obama broke a promise anymore, he’s certainly expecting the audience to think he did.

And, for that matter, if we’re playing with technical truths, Obama has kept his “promise.” After all, the plant is still on standby, so it’s arguably not closed. Plus, he didn’t say it would be continually producing cars and trucks for the next hundred years—just that it would still be open then. So, we have to come back in February 2108 to see!

Petty parsing of the facts aside, Ryan’s attack here is just weak. Not only are voters more likely to blame the Congressman who’s spent his whole life in the town than the president of the United States for not saving the plant, this is a ticket that opposes government bailouts of auto plants! “Let Detroit go bankrupt” and all that.  And, it should be noted, both President Bush and President Obama gave GM billions of dollars to stave off collapse.

The odd thing is that there are actually useful talking points out of this incident that are neither stupid nor skirts the truth. Indeed, Ryan’s previous stump speech on this was more effective. NRO’s Henry Payne described it back on August 21 (“Janesville: Ryan vs. Obama“):

“I remember President Obama visiting it when he was first running, saying he’ll keep that plant open — one more broken promise,” Ryan said. “One of the reasons that plant got shut down is $4 gasoline. You see, this costs jobs. The president’s terrible energy policies are costing us jobs.”

Okay, so it wasn’t a broken promise. But we don’t need a broken promise—or any mention of Obama’s appearance at the plant as a candidate at all—to talk about the impact of government policies on business. Payne continues:

Under Obamanomics, the government picks winners and losers. Obama promised Janesville would be a winner even as his economic policies guaranteed it would always be a loser. Indeed, Obama’s whole 2008 Janesville speech is a sobering road map for the job-killing policies he has put in place as president.

Some of these issues are somewhat silly, too; we had $4 gas for a while under oil-friendly Bush-Cheney, too. And we certainly can’t blame Obama policies for the closure of the Janesville plant even if we go with the March 2009 shutdown date. But pushback against Democratic policies that put environmental concerns ahead of jobs, place heavy regulatory burdens on business, and the like are much more solid ground for an attack than “Obama didn’t save my town’s plant.” (Although I’m not sure I’d use ObamaCare as an argument against burdening companies with medical costs; indeed, socialized medicine is how other countries avoid that burden.)

Payne’s “Under Obamanomics, the government picks winners and losers” is worth picking up, too, I think. It was one of the more powerful themes of the early Tea Party protests and resonated well with voters. If we just let the free market decide, it’s easy to understand why Janesville is on standby hoping for a miracle while its sister plant in Spring Hill, Tennessee is being reopened: That plant is newer and it’s in a cheaper location. But if the government is picking winners and losers, it’s personal.