The two Minnesotans in the Presidential race are starting to trade barbs.

Tim Pawlenty made headlines earlier this month when he stated that Michele Bachamnn, who has vaulted into the lead in Iowa according to some recent polls, lacks experience had hasn’t really accomplished much during her time in Congress. At the time, I noted that it made sense for Pawlenty to draw attention to the distinctions between himself and Bachmann since she appeared to be capturing the anti-Romney vote that many thought would go to him. Since then, there’s been a quiet but continual drumbeat of criticism coming from the Pawlenty camp directed at Bachmann. This week, Pawlenty appeared to suggest that the stories about Bachmann’s migraines were a relevant issue because of the demands of the Presidency, a statement that caused some to wonder if his campaign was the source of the rumors.

Now, Michele Bachmann has hit back in a just-released campaign statement:

Executive experience is not an asset if it simply means bigger and more intrusive government.

“Governor Pawlenty said in 2006, ‘The era of small government is over… the government has to be more proactive and more aggressive.’ That’s the same philosophy that, under President Obama, has brought us record deficits, massive unemployment, and an unconstitutional health care plan.

“Actions speak louder than words. When I was fighting against the unconstitutional individual mandate in healthcare, Governor Pawlenty was praising it. I have fought against irresponsible spending while Governor Pawlenty was leaving a multi-billion-dollar budget mess in Minnesota. I fought cap-and-trade. Governor Pawlenty backed cap-and-trade when he was Governor of Minnesota and put Minnesota into the multi-state Midwest Greenhouse Gas Reduction Accord. While Governor Pawlenty was praising TARP — the $700 billion bailout in 2008 — I worked tirelessly against it and voted against it. I have demonstrated leadership and the courage of my convictions to change Washington, stop wasteful spending, lower taxes, put Americans back to work and turn our economy around. I’m a hard worker who exhibits that courage in the halls of Congress and will take that same conviction to the White House.

Since coming to Congress, I have led the fight against the job-killing Obamacare legislation, bringing tens of thousands of Americans to Washington to fight for free market healthcare. From my position on the Financial Services Committee, I have seen first-hand the damage done to the American economy by the scandals of Fannie Mae and Freddie Mac, and I have been deeply involved in making sure that such calamities never happen again. And I was the first Member of Congress to propose the repeal of the Dodd-Frank legislation — another job-killer.

Bachmann’s response was clearly designed to appeal to the Tea Party and the GOP base, and it was likely prompted by an email yesterday from Pawlenty’s campaign manager that repeated the experience argument:

Tim Pawlenty manager Nick Ayers sent a blast email today to supporters making the case why Iowans will rally to the former Minnesota governor and Michele Bachmann will fade.

After reiterating Pawlenty’s accomplishments in St. Paul, Ayers wrote: “This doesn’t make great fodder for cable news but as more Republican primary voters start to tune in to the race, they are finding out that the Governor’s record and message will stand the test a brutal campaign. Other candidates’ records (or lack thereof), and plans for the future (or lack thereof) won’t.”

The manager also claimed they “had a record week of straw poll sign-ups.”

The fact that Bachmann is deigning to respond to Pawlenty is interesting in itself. Until now, her campaign has largely ignored his comments because he’s been so far back in the polls. There are signs that might be changing though:

A new poll in Iowa brings good news for both Minnesota presidential candidates, as they came out on top in a one-two finish.

The poll, from The Conservative Journal, has Bachmann with a commanding lead at 33 percent. Pawlenty follows her in second at 13 percent, one point ahead of Mitt Romney in third.

Both candidates have been campaigning heavily in Iowa, and both have run multiple TV ads in the Hawkeye State.

For Bachmann, the poll is one more data point that shows she’s the frontrunner in Iowa, where Romney has said he’s not planning to campaign as aggressively as he did in 2008. Romney is also not participating in the Ames Straw Poll in August, the next big milestone for the 2012 campaign. Many pundits say Bachmann is the favorite.

For Pawlenty, the second-place finish is a sign of life for his campaign, which has struggled over the past month. He was only at 6 percent in the Des Moines Register’s first Iowa poll, and has consistently trailed Romney in Iowa, if not Herman Cain and others as well.

I am not sure how reliable this pollster is, and it’s worth noting that in another recent poll, Pawlenty was down in Jon Huntsman territory at 2 percent. Nonetheless, it appears that the Bachmann campaign believes it’s worth taking on Pawlenty, and that’s something he should take as a good sign. I would expect the two campaigns to keep this up for the next three weeks as we head into the Ames Straw Poll and the debate right before it.

In fact, that may be the most interesting thing to watch in that debate. Will Pawlenty keep up his criticism of Bachmann when the two of them are sharing the same stage, or will he back down like he did with the “Obamneycare” line during June’s debate on CNN? My guess is hat, given the universally negative reaction to his unwillingness to confront Romney mano-a-mano back in June, Pawlenty is likely to take the bait if offered and hit Bachmann. The thing he’ll need to be careful about is not overdoing it and making himself look like a jerk for going after a woman. That’s something George H.W. Bush (1984 debate with Geraldine Ferraro) and Rick Lazio (2000 debate with Hillary Clinton) could tell him about if he asked. 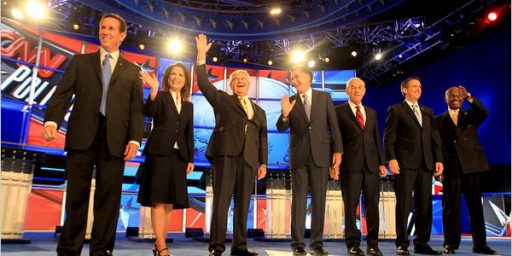