As is often the case with sex scandals, pretty much everything ever written about General David Petraeus takes on an ironic double meaning in hindsight. 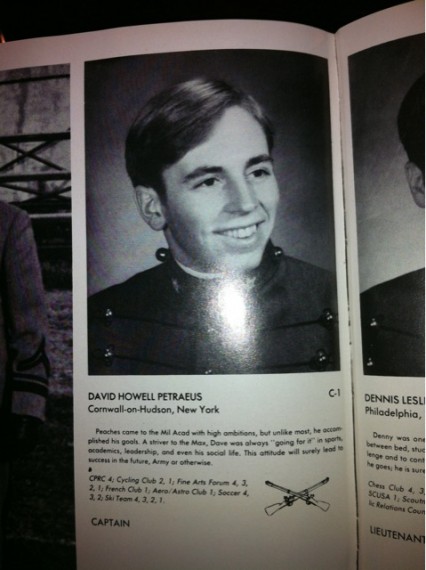 As is often the case with sex scandals, pretty much everything ever written about General David Petraeus takes on an ironic double meaning in hindsight. (As Steven Taylor can verify, it was next to impossible to teach American politics classes in the aftermath of the Monica Lewinsky scandal.)

Every mention of Broadwell being “embedded” with Petraeus while researching her hagiography is now giggle inducing. Newsweek‘s “General David Petraeus’s Rules for Living,” published less than a week ago, seems rather unfortunate.

Carl Prine‘s September 2011 parody piece, “Peaches for Desert,” is especially amusing in hindsight. Based on a real-life incident in which a Taiwanese woman was conned into wiring $30,000 to someone she believed was David Petraeus, Prine offered a list of “clues that you’re with the real David Petraeus.”

4.  After your Skype session, Paula Broadwell asks you what you thought about it. And then she asks you again.

I’ve nicknamed her “Queen David.”  Paula is writing both her dissertation and a book about Petraeus and she’s incessant about knowing everything about the man.

During one waterboarding incident, I divulged to her King David’s junior high school locker combination (3-2-4), the fact that he prefers boxers over briefs and his Republican party voter ID number in New Hampshire (3-2-4) and she still kept dunking me before rendering me to a dank dungeon at Penguin where the Syrians took over.

2.  Even if the sex wasn’t that great, you’re haunted by an annoying gnome-like pundit who insists that it was the best damned whoopee of your life. Unless you’re just too stupid to realize it.

If you notice a bearded fellow prowling about the sheets, yapping incessantly that the bed you made and slept in is now the best bed of all time only because of the magical and ingenuous lovemaking of David Petraeus — a session so powerful and beautiful that all the Army’s simpletons “don’t get it” because they can’t even fathom it, man — that’s just Tom Ricks.

He does that sort of thing.  Pay him no mind.

And if the person saying much the same things doesn’t have a beard, that’s just every other Beltway journalist, pundit or think tank wonk.  Get used to it, lady.  If you’re going to woo King David you’ve got to deal with his princes, courtiers and stenographers or it just ain’t real, blind, everlasting and unqualified love.

My own July 2007 piece warning against “Petraeus Fetishism” isn’t particularly funny—although the title now is.  As is the fact that this post goes into a category that’s existed on OTB since its earliest days, Military Affairs, that never had this particular connotation in my mind until now.