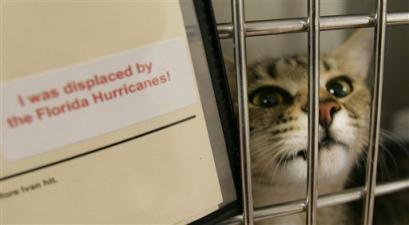 One of the many animals evacuated from Florida during Hurricane Charley sits in the Houston SPCA shelter waiting to be adopted Tuesday, Sept. 14, 2004 in Houston. Almost 200 dogs and cats, some left homeless in Florida by Hurricane Charley, were taken to the shelter in Houston and others were en route Tuesday from Louisiana where authorities feared shelters there would be inundated by the killer winds and waves of Hurricane Ivan, swirling in the Gulf of Mexico. (AP Photo/David J. Phillip)

What kind of people abandon their pets during bad weather? I understand that emergency shelters usually won’t take pets. But, surely, people could make other arrangements.

“If we turn up dead tomorrow, it’s my fault,” said Jane Allinder, who stayed stubbornly behind at her daughter’s French Quarter doll shop to keep an eye on her cat.

Cats are portable. Put the animal in a pet taxi or other secure device and take it with you. 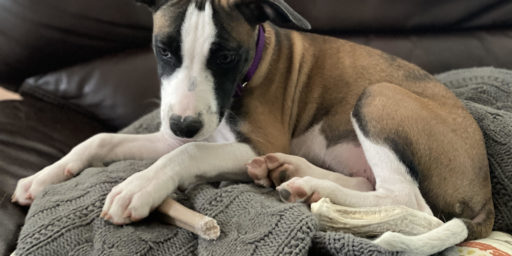