The Dallas shooting spree ended with police killing the perpetrator with a drone. I'm okay with that. 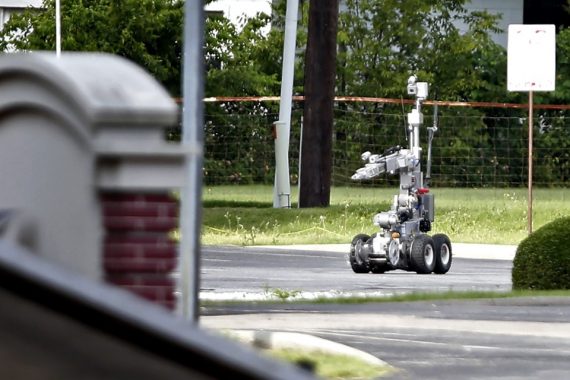 HUTCHINS, TX – JUNE 13: Dallas Police use a robot to gain access to an armoured van, which authorities believed was rigged with explosives, and was driven by a suspect who attacked Dallas Police Headquarters in Dallas, Texas, June 13, 2015. A lone shooter in an armored van, believed to be rigged with explosives, opened fire on the Dallas Police Headquarters early Saturday morning. The shooter reportedly unleashed multiple rounds and planted explosive devices around the station before leading police on a chase that ended in a standoff in the parking lot of a fast food resturant. (Photo by Stewart F. House/Getty Images)

I’ve been traveling the last few days, so my already sporadic blogging has been even lighter. One story that has emerged in the wake of the horrible shooting spree in Dallas that killed four police officers has intrigued me, however, in that it raises a new issue rather than simply rehashing the longstanding arguments about guns and race.

A posting at Anti-Media is typical of reactions I’ve seen in my Facebook feed:

The Dallas shootings have ushered in a very new world for U.S. citizens. For the very first time, a drone has been used on U.S. soil to kill an American without trial or charges.

The suspected shooter in yesterday’s tragic killings, U.S. Army veteran Micah Xavier Johnson, was, according to police and press reports, holed up in a parking garage and would not give himself up. After hours of what police claimed were fruitless negotiations with Johnson, a weaponized robot was sent to where he was hiding and blown up, taking Johnson with it.

Get past the horror of what Johnson was accused of doing and think about that precedent for a moment. Is it not chilling?

RPI regular contributor Peter Van Buren, a retired State Department official who did a tour in Iraq, put a very fine point on the “robot” bomb:

We have the first law enforcement use of drone (albeit with wheels not wings) to kill someone w/out trial in America https://t.co/l0Db8h0ASM

Indeed, even without wings, this was a drone sent in to kill an American suspected of a crime.

Police claim that continuing the negotiations was pointless and attempting to capture him would have put officers at risk. He was supposedly shooting. While no sane person wants police officers to be killed, risk is something we are told they willingly accept when they sign up for police duty. There are plenty of low-risk jobs out there.

The media and opinion-leaders are presenting us with a false choice: if we question the use of drones to kill Americans — even if we suspect they have done very bad things — we somehow do not care about the lives of police officers. That is not the case. It is perfectly possible to not want police officers to be killed in the line of duty but to wholeheartedly reject the idea of authorities using drones to remotely kill Americans before they are found guilty.

We should, of course, question it every time our police kill someone. While it may sometimes seem otherwise, our streets are not a battlefield. Police officers ought indeed take exceptional risk to protect innocent lives. Nor, unless their lives or the lives of innocents are in grave danger, should they kill even suspected criminals if they can be apprehended without lethal force.

In this particular case, we have a psychopath who has been actively shooting police officers and who was a real risk to continue shooting people.  It strikes me as unreasonable to expect police officers to take a very high risk of getting killed in order to capture him.  It’s the classic case where the ue of lethal force is justified.  We should, of course, investigate this and any police shooting after the fact to ensure that best practices were used. Perhaps there was another way to have gone about this and, if so, we should learn from it. And, if such practices would reasonably have been expected to be employed by Dallas PD, then punitive action should ensue.

Regardless, however, of whether lethal force was justified in this instance, I have no issue with the means employed. My position here is identical to the one I’ve formed over the years of the use of unmanned aerial vehicles (aka “drones”) on the battlefield:  (1) I strongly prefer the use of technology that kills bad guys at minimum risk to good guys but (2) have some fear that technology that makes the act killing easier makes the decision to kill easier and thus more likely.

On the battlefield, I’m happy with killing bad guys more efficiently so long as we don’t redefine bad guys too broadly simply because killing them is now easier. I’m also worried that we increase our risk of inflicting collateral damage—killing noncombatants—by increasing the number of strikes as a byproduct of said easiness.

On our streets, I’m happy to make it easier to kill bad guys without getting the good guys killed or maimed.  But I do worry about further normalizing the killing of people that police identify as bad guys.

The bottom line is that the discussion should be about the rules for killing rather than the means of killing.  Drones, whether flying or otherwise, are simply a tool. If the job needs doing, I’m all for doing it safely and well.