Jim VandeHei and Mike Allen are leaving after a dispute with their chief investor. 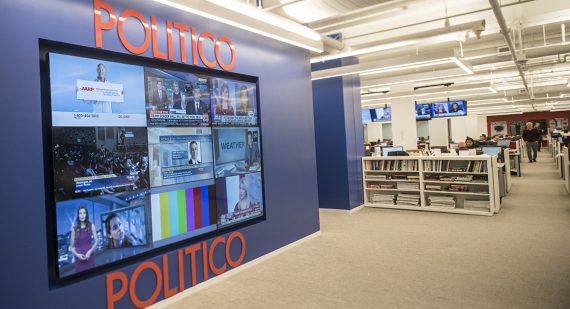 The co-founder and most important voices at POLITICO are leaving after a dispute with their chief investor.  HuffPo:

Politico CEO Jim VandeHei and chief White House correspondent Mike Allen will leave the news organization they helped launch nine years ago and built into a politics and policy juggernaut.

VandeHei told staff Wednesday that he was departing after the election and that Allen, chief operating officer Kim Kingsley, chief revenue officer Roy Schwartz and executive vice president Danielle Jones would also be “seeking their own new adventures” late this year, confirming an earlier HuffPost report on the shake-up.

Staffers said VandeHei and Politico owner Robert Allbritton have clashed over spending and budgets. A possible split was the talk of the newsroom Thursday, just four days before the Iowa caucuses.

“Robert had enough with them spending shitloads of money,” said a source with knowledge of the dispute. The source added that the departing employees are discussing plans to build their own news outlet. “Mike [Allen] was telling people that they are going to start a media organization together, but it won’t compete with Politico.”

These transitions make perfect sense for the publication, coming a decade (almost to the day) after I recruited them to join this cause. Jim in particular began signaling to me some years ago that he hoped the next stop in his career would be to once again start a new venture. Mike has launched and maintained the Playbook franchise — 365 days a year — longer than seemed humanly possible.

Watching these extraordinary professionals blossom as leaders, stretching their areas of expertise as their responsibilities grew, has been one of my great satisfactions at POLITICO. I will have more to say about all of these people lower in this note, and much more to say throughout 2016 as we find occasions to celebrate their achievements. First, however, at this moment of change I would like to say a bit about continuity.

What I have said to my leadership team is something I want to emphasize I’ll say to all of our nearly 500 POLITICO employees (a total ten times what we had at our launch): We are about to experience the most exciting, and I expect most enjoyable, period of expansion in ten years. With our revenue rapidly expanding, I am eager to make robust new investments in editorial quality, in technology, in business talent, and in new markets that we have not yet conquered.

The timing is poetic: it will mark my 10th Anniversary, almost to the day. I came in just as the Barack Obama phenomenon exploded in 2006 and plan to depart just after his successor is picked and his presidency concludes.

There are two reasons to do this now.

First, I caught the entrepreneurial bug a decade ago when we started this place and can’t seem to shake it. There is no greater challenge than trying to match in a new space the magic and success we pulled off here. This moment in media and in history is putting every sector and idea in play – and it is too intriguing and wide open to play it safe. I plan to start a new venture when I depart.

Second, and as important, I can leave now knowing a template for growth has been set, a first-class leadership team assembled and prepared for this transition, and POLITICO is powerful and durable enough to outlast us all. The true measure of business success is building a company that can prosper when the founders go. We stocked the place with talent during the past three years, in anticipation of this moment.

It’s remarkable the risk that these guys took in leaving prominent gigs at the Washington Post and other prestige venues to launch a political newspaper just as the newspaper business was collapsing. They quickly turned it into a–if not the—must-read outlet for junkies of American politics. To be sure, they also mastered a lot of the annoying fluff that people hate about the Web, often emphazing cutesy headlines and the constant churn of rumor to drive traffic. But they undeniably created something wildly successful.

Five years ago, it would have been inconceivable that VandeHei and Allen would leave POLITICO, much less that the paper could survive without them. At this point, though, they’ve almost certainly built a sustainable operation. They have a huge staff and an established culture and brand.

My chief concern is Allbritton’s desire to cut costs. While inevitable in this market, I fear that they’ll follow so many other outlets in doing so by filling the staff with just-out-of-college kids and churn through them as they’re used up or get too expensive. There will always be a steady supply of really smart folks who want a platform for reaching an audience. But intelligence is no substitute for wisdom, which is gained by long experience.