Jim VandeHei and company have put out a new style guide.

Disgruntled ex-POLITICO writer Timothy Noah takes aim at its offshoot in “Hell Is a World in Which Everybody Writes Like Axios.” He ain’t wrong.

After some preliminaries (that ironically violate the house styles of both POLITICO and Axios) he gets to it, setting up his target by aping it:

Shoot Me Now: Jim VandeHei, Mike Allen, and Roy Schwartz of Axios are trying to get the whole country to write in the same grocery-list style as Axios, through publication of Smart Brevity: The Power of Saying More With Less.

The big picture: When the three Politico defectors founded Axios in 2016, VandeHei and Co. hoped to sell high-priced trade news to corporate and government subscribers. But that market was glutted already by Politico and Bloomberg. So instead Axios created AxiosHQ, which charges corporations a reported $10,000 and up to teach them how to write like Axios.

• Axios was purchased in August by Cox Enterprises for $525 million.*

• VandeHei and Co. kept a majority stake in Axios HQ. Smart Brevity is a marketing tool for Axios HQ.

• Funnily enough, The Elements of Style is shorter (132 pages—and that’s padded out with Maira Kalman’s illustrations!—versus 218 for Smart Brevity). Plus, as Colin Dickey noted in his September 15 review of Smart Brevity in TNR, “a book that advises ‘skip the anecdotes'” turns out to include a lot of tedious anecdotes, principally about VandeHei, who’s a nice guy but loves to hear himself talk.

• Axios gets some pretty good scoops, but the site’s abbreviated house style, intended to serve multitasking corporate fatheads, makes it harder rather than easier to understand than regular old discursive prose. Smart Brevity is loaded with “before-after” examples in which the “before” phrasing is hilariously superior to the “after” rendering in the supposedly better Smart Brevity style.

Why it matters: As with Timestyle, Axios-ese is spreading like a noxious weed to other publications, doing violence to the mother tongue, dumbing down the news, and, ironically, impeding communication.

As I’ve noted countless times before, the practice of blogging turned me into an incredibly atypical consumer of news content. While I find this style annoying for many reasons, my principal annoyance is shared by next to no one who isn’t blogging about it: the format is hard to replicate in a block quote.

Still, annoying as the format is, Vandehei and company have managed something extraordinary: they left the Washington Post to create a new newspaper at a time when the industry was already failing, were wildly successful at it, sold that one for big bucks, and then launched yet another one that’s doing gangbusters. And they sold off part of that one for more than half a billion dollars and still continue to profit off it. Maybe everyone should be copying them.

Noah’s critique, though, is an interesting one. He starts by acknowledging the good:

Like a lot of things, the Axios dialect emerged from a good idea that spun madly out of control. At Politico, where I was an editor for six years, it was VandeHei who came up with the insight (or so I was told) that most spot-news stories consisted of two or three short paragraphs that conveyed the necessary new information, followed by 12 paragraphs of filler (what journalists call “B matter”). At Politico Pro, the paywalled trade-news division where I worked, such filler was especially unnecessary because subscribers to each topic-focused “vertical” (mine was about labor) already possessed expertise in the general subject. So we tried to make spot-news stories no longer than would occupy a single iPhone screen without scrolling down. Those who wanted to dig deeper could click on embedded links that took them to government documents and other background material.

VandeHei’s problem after he left Politico was that he’d already had his valuable insight, and Politico was making profitable use of it. He needed a second act. So at Axios, VandeHei took that insight and pushed it and stretched it to the point of self-parody. The grocery-list format was born.

Back in those halcyon days when blogging was all the rage and professional journalists were trying to understand why we were getting so many eyeballs, I was invited to a conference at USC’s Annenberg School of Communication on the subject. This was October 2006, a year before POLITICO’s launch. And I pointed out, to the annoyance of most of the professional journalists in the room, that the standard practice of including a long anecdote before getting to the actual point was tedious. Part of what made blogs appealing is that we were digesting their reporting for news junkies and then offering commentary.

POLITICO, of course, offered original reporting. But it understood that the audience was different than it was in the days when people got “yesterday’s news in their bushes today.” Getting right to it suited a time-crunch society. And, probably serendipitously, the format arrived almost at the exact same time as the first iPhone set off the mobile revolution, shifting reading from desktops and laptops to portable devices carried everywhere.

One of the problems with Axios-ese is that it doesn’t take into account that news isn’t read but skimmed, a phenomenon that long predates the World Wide Web. “People don’t read the morning newspaper,” wrote Tom Wolfe, paraphrasing Marshall McLuhan, in 1975. “They slip into it like a warm bath.” What Wolfe meant was that readers didn’t typically engage in critical thinking while reading the newspaper because they were skimming through it too quickly. If you have a newspaper-reading habit you have a skimming habit, whether you read on paper or online.

Now along comes VandeHei to compress the news with juiced-up hyperbole and bullet points and “what’s next” and (most annoyingly) “be smart,” and the goddamned thing can’t be skimmed because it’s already been skimmed for you—pre-chewed, if you will—by the writer. Which means you have to slow down. Skim an Axios story, and it will fly past so quickly you’ll have no idea what it says. You have to read carefully to grasp its basic meaning. Then you have to waste even more time trying to figure out how much to discount for bullshit hype. Sometimes I have to read an Axios piece two or three times to understand what it says. A New York Times story I can digest with a single quick skim.

applies less to me than most, since I tend to read stories with an eye to blogging or tweeting them and thus am always reading critically for key insights and holes in the argument being advanced. But, yes, I certainly skimmed in the days when I was reading the daily newspaper.

There are other practical problems with the format, which I learned during my last months at Politico (my vertical wasn’t pulling in enough revenue and eventually got shut down) as we began to experiment with a news template that nobody was allowed to call an Axios knockoff because it so obviously was just that. If you oblige your reporter to include subheads like “what’s next” and “why it matters” in every story, then you’re obliging that reporter to say what’s next and why it matters. And with an extremely fast turnaround for these short spot-news stories—gotta beat Bloomberg!—there’s a good chance your reporter doesn’t have time to find out what’s next and why it matters. So the reporter produces some mumbo-jumbo that can’t be proven wrong and wastes the reader’s time just to adhere to a rigid template.

I only read a handful of Axios stories a week, almost always following a link from an aggregator, so I hadn’t quite grokked that they applied this format to every article. I thought it was mostly a Jim Allen thing. It’s one thing for a seasoned hand like Allen, who has decades of experience and oodles of high-placed sources, to offer pithy analyses of his reporting. It’s quite another for cub reporters cranking out “content” on a quota system.

Axios-ese strikes me as particularly unsuited to corporate communication, which for better or worse is packed deliberately with euphemism and indirection and exaggerated diplomacy. I don’t doubt that corporate chiefs want to receive memos that are shorter and more direct, but they don’t want to write memos in that style, and neither do their underlings.

While I’ve worked in the private sector, I’ve never been in a true “corporate” setting. But the military was teaching “Bottom Line Up Front” writing in the 1980s. Most aren’t good at it but it remains the preferred style for memos, emails, and the like.

This, though, is somewhat amusing:

Here’s what the authors of Smart Brevity describe as a “simple work update,” before and after they’ve improved it.

John—we decided after lots of meetings and endless deliberation to shrink Monday meetings to just the core management team. You know this has been a source of great frustration for many, especially with the size of the group growing so fast.

Nobody, the authors say, “wants to wade through that mess to realize the point.”

This is described as putting the audience, i.e. John, first. The Axiosified version certainly conveys the information faster, but it presumes that John, whose job sounds like it could be hanging by a thread, is an android with no feelings. What the Axios-ese version communicates can be reduced still further to its nub:

I would offer that both the Before and After are poorly written. But, frankly, John is going to get the message that he’s viewed as unimportant from either of those. Were I trying to spare his feelings, I would go with something like:

We all know that meetings are a soul-sucking experience that interfere with employees’ ability to get their work done. At the same time, they’re a necessary evil for managers. In an effort to balance these, only senior managers will be required to attend recurring staff meetings. Others will be invited on a case-by-case basis when there is a specific need for their contribution.

And I wouldn’t just send it to John! I’d make it an organization-wide email.

The final reason to resist creeping Axios-ification is the same reason Gibbs had to parody Timestyle. It’s just ugly. Expository English is beautiful, or can be. Axios-speak is hideous, and it can’t be anything else. I don’t crave good discursive English only in literary fiction or a New Yorker essay. I crave it in instruction manuals (where it’s never present), cooking recipes (which have lately gotten clearer, thank goodness), and, yes, the news. Lucidity and attention to detail aren’t just aesthetic values; they make it easier to set up your TV, cook your soufflé, or understand the world around you.

Honestly, the only place I regularly find great prose in journalistic writing is in a handful of magazines and upper-echelon sports venues. And even then it stands out from the crowd because it’s so rare.

Honestly, though, one of the problems of old-style newspaper writing was that so many reporters seemed to aspire to be novelists instead of journalists. I imagine that was the source of the annoying-to-me practice of starting so many stories with long anecdotes that may or may not be representative. 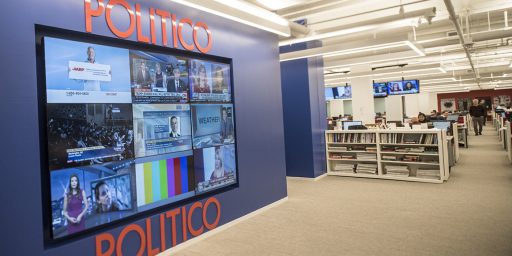