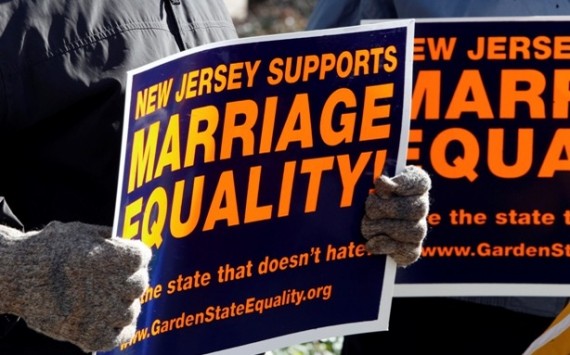 TRENTON — New Jersey voters support giving same-sex couples the right to marry by a two-to-one margin, according to a poll released this morning.

The Quinnipiac University poll of 1,068 voters found 60 percent support a state law to allow same-sex marriage, while 31 percent oppose it.

The result is barely different from before the U.S. Supreme Court invalidated the Defense of Marriage Act, which barred married gay couples from getting federal benefits. In March, 64 percent of New Jersey voters said they supported gay marriage while 30 percent opposed it.

The state Legislature last year passed a bill to allow gay marriage in New Jersey. But Gov. Chris Christie vetoed it, saying that although he personally opposes gay marriage voters should decide the issue in a ballot referendum instead.

New Jersey currently allows civil unions between gay couples, which are supposed to give them the same rights as marriage. But the Supreme Court ruling only affects marriages, leaving civil union couples without the federal benefits.

Garden State Equality, the state’s most influential gay rights organization, opposes putting the measure on the ballot because they believe civil rights should not be put up for a vote.

Senate President Stephen Sweeney (D-Gloucester) and Assembly Speaker Sheila Oliver (D-Essex) have refused to put the question on the ballot and are working to gather the two-thirds of votes they need to override Christie’s veto.

As I noted last month, overriding Christie’s veto is going to be difficult because, at least in the Assembly, it will require not only picking up at least six Republican votes but also the votes of the six Democrats that voted against the bill on its first pass through the legislature. That’s one reason why one has to wonder why the parties are being so resistant to the idea of a ballot initiative. Given the polling, it seems pretty clear that the measure would pass overwhelmingly. If they worked quickly enough, they could get the measure on the ballot for the 2014 General Election, which would likely bring out an electorate that would be supportive of the initiative to begin with due to the fact that the New Jersey Senate seat that Cory Booker is likely to win will be up for election to a full six year term. If they don’t go this route, then the Courts are seemingly the only option at this point, and that’s going to take several years to work itself out at the very least.