Poll: Americans Support Sacrifice For Others, Not Themselves

A new poll finds strong support for raising taxes on other people and staunch opposition to cutting programs that benefit themselves. 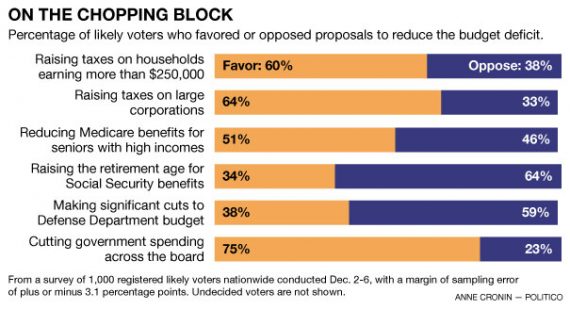 A new poll finds strong support for raising taxes on other people and staunch opposition to cutting programs that benefit themselves.

A new POLITICO/George Washington University Battleground Poll finds that 60 percent of respondents support raising taxes on households that earn more than $250,000 a year and 64 percent want to raise taxes on large corporations.

Even 39 percent of Republicans support raising taxes on households making more than $250,000. Independents favor such a move by 21 percentage points, 59 to 38 percent.

Only 38 percent buy the GOP argument that raising taxes on households earning over $250,000 per year will have a negative impact on the economy. Fifty-eight percent do not.

Three in four voters want to “cut government spending across the board,” but 59 percent oppose making significant cuts to the defense budget and 46 percent support ending foreign aid.

This is not surprising, in that it’s consistent with both other polling and human nature. Indeed, it’s rather surprising that only 60% favor raising taxes on those earning over $250,000 when that threshold impacts only 2% of taxpayers.

That two thirds favor taxing large corporations more is to be expected, given the backlash created by the financial crisis and various reports of mega-profitable companies paying zero taxes. While our nominal corporate tax rate is much higher than the norm in the developed world, there are enough loopholes in the system that the effective rate is often quite low. That “large corporations” only nominally pay taxes, passing them on as an expense to consumers, doesn’t mitigate the fact that most Americans perceive them as getting over.