Not surprisingly, a new poll shows that most Americans are at the very least skeptical about the Administration's plans regarding Syrian refugees. 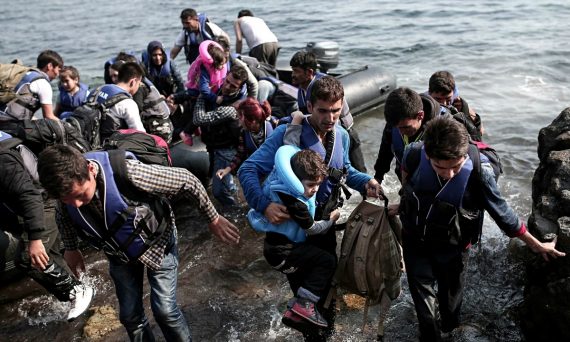 One of the first polls to come out in the wake of last week’s attacks in Paris shows that Americans are strongly opposed to the idea of allowing Syrian refugees into the United States:

Most Americans want the U.S. to stop letting in Syrian refugees amid fears of terrorist infiltrations after the Paris attacks, siding with Republican presidential candidates, governors, and lawmakers who want to freeze the Obama administration’s resettlement program.

The findings are part of a Bloomberg Politics national poll released Wednesday that also shows the nation divided on whether to send U.S. troops to Iraq and Syria to fight the Islamic State, an idea President Barack Obama opposes, and whether the U.S. government is doing enough to protect the homeland from a comparable attack.

Fifty-three percent of U.S. adults in the survey, conducted in the days immediately following the attacks, say the nation should not continue a program to resettle up to 10,000 Syrian refugees. Just 28 percent would keep the program with the screening process as it now exists, while 11 percent said they would favor a limited program to accept only Syrian Christians while excluding Muslims, a proposal Obama has dismissed as “shameful” and un-American. 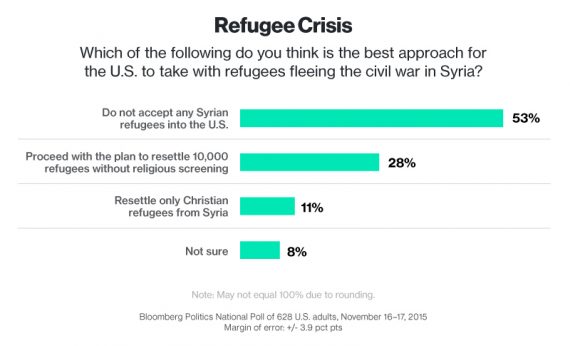 The poll also found that terrorism and the seeming growing strength of ISIS have become serious public concerns among voters, something that is likely to influence the Presidential race in both parties going forward. If there’s any good news to be found in the poll, I suppose, it is the fact that the majority of Americans, and even the majority of Republicans, consider Islam to be a peaceful religion and the terrorists to not be representative of the majority of its adherents. 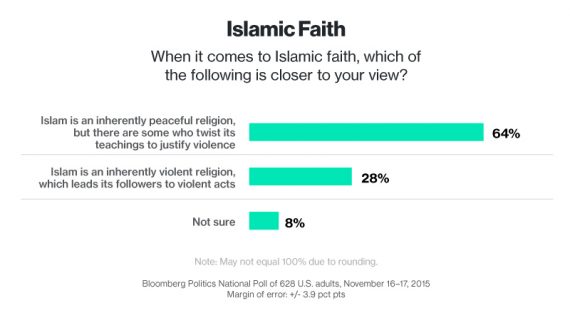 These results aren’t entirely surprising, of course. Even before the Paris attacks and the news that one of the men involved apparently made his way to Paris after having arrived in Europe as part of the flood of refugees that have hit the continent since the summer, the Administration’s refugee program was not popular with the public. A Quinnipiac University poll released in September showed that 53% of those polled opposed the Administration’s plan, with the results sharply divided by party. At that point, some 60% of Democrats supported the plan, while 71% of Republicans opposed it. Among Independents, 45% said they supported the plan. In the new Bloomberg poll, 69% of Republicans oppose the Administration’s refugee plan. Support for the plan among Democrats, meanwhile, has dropped to 46% among Democrats, with 36% now opposing the plan. This poll does not provide a breakdown for Independents. This would seem to confirm my initial assessment that the attacks in Paris has changed the political calculus surrounding the refugee debate, and goes a long way toward explaining the manner in which many American politicians, including nearly all of the nation’s Republican Governors and Speaker of the House Paul Ryan, have reacted and the calls for a halt to accepting new refugees pending resolution of security concerns.

We’re likely to see other polling that confirms this finding regarding Syrian refugees in the near future and, indeed, it’s probably that the opposition to the program is only likely to increase in the near future. If the Administration truly intends to go forward with this plan, which it legally is free to do regardless of what the Governors say unless Congress can find a way to stop the process, then it has a choice to make. Either it ignores the calls of politicians, including a number of Democrats such as New Hampshire Governor Maggie Hassan and New York Senator Chuck Schumer, who is likely to be the leader of the Senate Democratic Caucus when the new Congress convenes in January 2017, or it can seek to change public opinion. So far, from my observation, the Administration has utterly failed to address the security questions in a substantive way. Unless it does so, public opinion is only likely to turn against it even more. 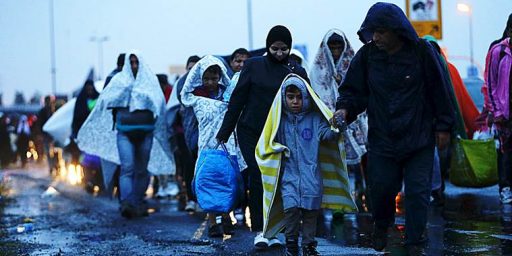 Syrian Refugees: Separating The Truth And The Facts From Myth, Paranoia, Fear, And Xenophobia

The GOP Candidates And The Attacks In Paris