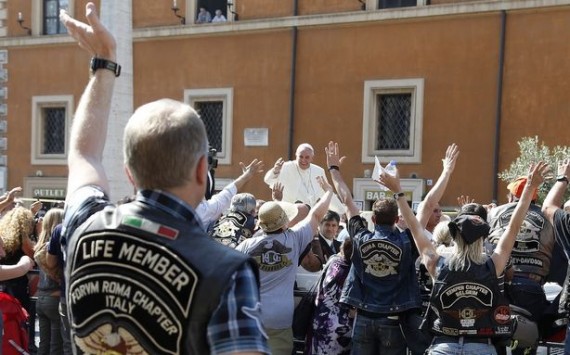 In what may have been one of the more unusual Papal audiences in some time, Pope Francis spent time with some men and their Harley’s today:

VATICAN CITY (AP) — Biker culture came to the Vatican on Sunday as Pope Francis blessed thousands of Harley-Davidsons and their riders celebrating the manufacturer’s 110th anniversary with a loud parade and plenty of leather.

Thundering Harley engines nearly drowned out the Latin recitation of the “Our Father” prayer that accompanied Francis as he greeted the crowd before Mass. Standing in his open-top jeep, Francis drove up the main boulevard leading to St. Peter’s Square, blessing the thousands of people in what was a giant Harley parking lot.

Once the service got under way, bikers in their trademark leather Harley vests sat in the square alongside nuns and tens of thousands of faithful Catholics taking part in an unrelated, two-day pro-life rally.

Francis addressed them both afterward, giving a blessing to the “numerous participants” of the Harley gathering.

Tens of thousands of Harley owners from around the world descended on Rome for the four-day anniversary of the American manufacturer.

The main events were Sunday’s Vatican blessing and a parade Saturday past the Colosseum and other historic landmarks — adding color, traffic and noise to an already colorful day in downtown Rome, thanks to a gay pride march.

The Pope even got his own leather jacket and two bikes from the Harley-Davidson company: 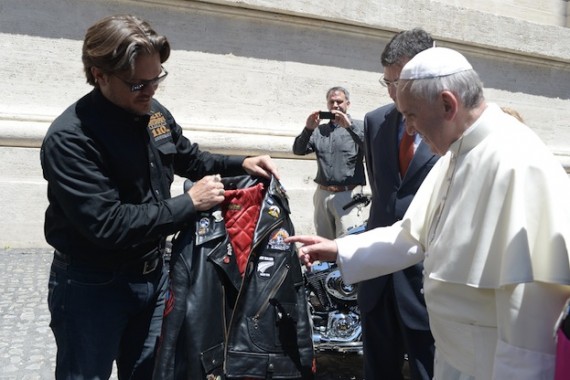 No word on whether he’ll be replacing the Pope Mobile with one of those bikes and updating the Papal garments.

Photos via The Atlantic Wire