Was there ever a more tepid endorsement than "Joe Scarborough for President? Sure, Why Not?" 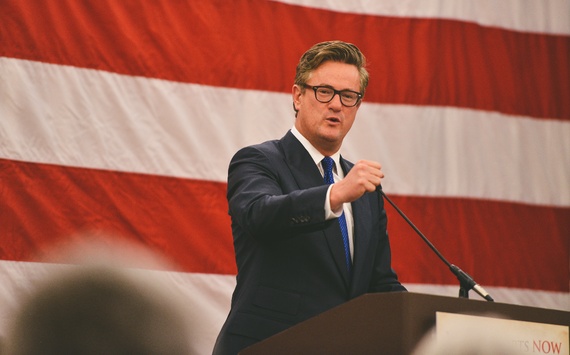 If there was ever a more tepid endorsement than Molly Ball‘s “Joe Scarborough for President? Sure, Why Not?” I’ve missed it.

[A]t least among the consultant-class elites and political obsessives who are Morning Joe‘s target demographic, the idea of a Scarborough candidacy has gained some small amount of traction. And after all, why not? Plenty of candidates have used a presidential run in recent years as the springboard to a TV contract; surely it was only a matter of time until someone went in the other direction.

The show’s air of chummy, Acela-corridor knowingness has made it destination viewing for the political class; it is shown in the morning on the televisions in the House of Representatives gym. Still, nary an election cycle passes without party elders trying to draft Scarborough for something—a Senate race in Florida, in New York, in Connecticut—and he’s always tempted. “I absolutely loved being in Congress,” he tells me. “It was my favorite job, ever.”

As a member of the Eastern media establishment, however, Scarborough has taken a somewhat different tack. He frequently criticized George W. Bush and questioned the strategy of Mitt Romney’s 2012 campaign. These views were unpopular with his party at the time, but they’ve since been vindicated, he believes. “I actually had to debate movement conservatives about whether Clint Eastwood’s speech [at the 2012 GOP convention] was good for the party or not!” he recalls. More recently, he’s excoriated Republicans for the government shutdown and come out strongly in favor of gun control.

Scarborough’s new book, The Right Path: From Ike to Reagan, How Republicans Once Mastered Politics—and Can Again, argues that the GOP will once again triumph when it emphasizes fiscal restraint and strikes a practical, inclusive tone. (In the New York Review of Books, Garry Wills was skeptical, writing, “Scarborough’s silly picture of American politics leaves out most of the things that matter.”) “I think it would really help us out if our voters didn’t keep getting older and whiter and richer,” Scarborough tells me. “That’s probably not a formula for success moving forward!”

Scarborough tells me that whether he plunges back into politics will depend on how the 2016 field takes shape. There are, he believes, two candidates who could plausibly capture the hearts of Wall Street and the GOP establishment: Chris Christie and Jeb Bush. Of Christie, he says, “If he comes out of all these investigations unscathed, I think Chris’ll be a really strong candidate in 2016.” Of Bush: “He was a great governor and I think he’d be a great candidate, but there’s an awful lot of questions about whether Americans want another Bush.”

But if neither man runs, Scarborough believes there will be a void. “You take those guys off the playing field and suddenly it is wide open,” he tells me. “Who else is there? It’s the most open Republican field, my God, since Eisenhower was trying to figure out whether to run or not in 1952.”

Scarborough is still a genuine conservative, in some ways too sympathetic to the Tea Party’s knee jerk fiscal conservatism for my tastes, but one who’s consistently labeled a Republican In Name Only. I’m not sure there’s much clamoring for him outside the DC chattering classes.

Now, I happen to like Scarborough. I watched the beginning of the show, via DVR delay, just about every morning for the first couple years after my wife died, since I was up with the girls and couldn’t get any work done. I finally gave up on the program a few months after Shady Hook because of the sheer monotony of Joe and Mika’s anti-gun crusade—even though I largely agreed with them on the issue. And, while he can occasionally be a preening schmo, he’s generally quite likable and sensible on the issues.  I’d have preferred him over any of the candidates in the 2012 cycle, including Jon Huntsman. He’s good on his feet, seems to have genuine convictions, and has relatively little baggage.

That said, I’m not sure who his base would be. (Granted, I had the same concern with Mitt Romney.) He’s close enough to the Tea Party wing to alienate the country club set and close enough to the latter to alienate the former. He’s spent years at MSNBC, which will by itself be enough to taint him in the eyes of many Republicans. And, goodness, he’s friends with Al Sharpton! There are thousands of hours of him on video, which will surely provide plenty of fodder for 30-second ad spots. And, frankly, I’m not sure a few years as a backbencher in the lower house of Congress followed by a decade yapping on TV is sufficient experience for the presidency.

Still, I’d prefer Scarborough to any of the names I’m seeing bandied about, save maybe Bush. Chris Christie is just too thin-skinned and, frankly, jerkish, to survive the gauntlet and none of the others appeal to be in the least.

UPDATE: TPM’s Tom Kludt thinks this is just an effort by Scarborough to sell his latest book. Hot Air’s Jazz Shaw has a sit-down with Scarborough in which he expands slightly on the answer he gave Ball:

When I do things, whether it’s running for Congress or doing our show, I do it 100%. I wake up at 4 in the morning, I do my show, a lot of times I go until 10 or 11 o’clock at night. Right now I’m not going 100%. If I were running, you would know that I was running whether I announced it or not. I’m just not doing it right now. I’m keeping all options open. People have been asking me from the national Republican Party since 2004, including running for Senate. It’s something that happens every two years. I keep all options open because I absolutely love being in Washington. It’s the best job I ever had. I make a lot more money doing the job I do now, I meet a lot of great people, I have a lot more freedom. You don’t have news people poking and prodding you all the time. But still, I loved being in Congress… I loved feeling like I was making a difference.

As crazy as this sounds, though, nearly two years before the 2016 primary season but time’s running out on Scarborough to make up his mind. Sure, he’s well known in political circles. But the time to put together a campaign team, get donors lined up, and start making inroads in Iowa and New Hampshire is fast approaching.