Despite the Democrats sweeping quite literally every statewide office in California, Proposition 19, the marijuana legalization ballot issue, lost by 10 points. 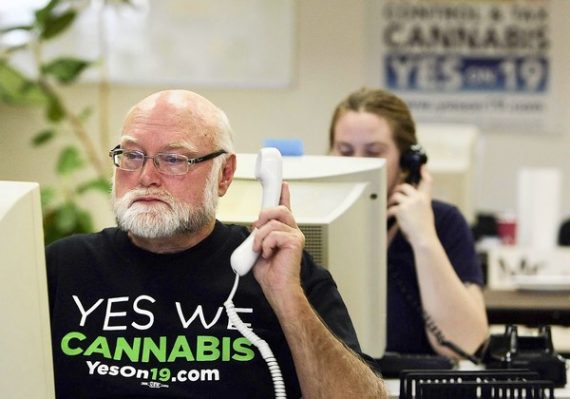 Despite the Democrats winning big in California, sending Governor Moonbeam and “Call Me Senator, I Worked Hard For That Title” to easy victories over well-financed Republican challengers — not to mention sweeping quite literally every statewide office, most by huge margins –  Proposition 19, the marijuana legalization ballot issue, lost by 10 points.

After taking a serious look at legalizing marijuana, Californians voted Tuesday to reject Proposition 19, which would have made the state the first to allow the drug to be sold for recreational use.

The measure drew strong support from voters younger than 25, as the campaign had hoped, but those voters did not turn out in unusually high numbers, according to a state exit poll. The initiative also failed to win over the moderate voters who make up the state’s decisive swing vote.

The San Francisco Bay Area was the only region to tilt toward the measure, but it did so just slightly. In Los Angeles County, where a quarter of the state’s voters live, the initiative lost.

Despite a potential double-digit loss, marijuana-legalization advocates said the proposition had transformed talk about legal pot from a late-night punch line into a serious policy matter.  “This has been a watershed moment,” said Stephen Gutwillig, the California director for the Drug Policy Alliance, which waged an extensive ad campaign for the measure. “Even in defeat, Proposition 19 has moved marijuana legalization into the mainstream of American politics.”

Tuesday’s vote was just the first round, say legalization advocates, who are aiming measures at the 2012 ballot in Washington, Oregon, Colorado and very likely California. But it’s also the second time in two years that California voters have rejected an initiative to soften penalties for drug crimes.

But the opposition was broad, according to the poll conducted by Edison Research for the National Voter Pool, a consortium of the major television news networks and the Associated Press. Men and women opposed it. Voters of every race opposed it. The campaign had hoped black and Latino voters would see the measure as a way to end disproportionate arrests of minorities caught with marijuana.

Of course, it’s not only anti-drug folks that oppose Prop 19.   There was strong opposition from the medical marijuana establishment, which naturally wants to protect its monopoly.   And there was, I gather, an “anti-corporate pot” movement by aficionados of microbrewed weed.

Still, My sense is that it’s only a matter of time before marijuana is legal out West; it’ll take a lot longer on the East Coast and in the Deep South.

UPDATE (Doug Mataconis): James and I were posting at the same time, so I’m consolidating here.

The pot legalization initiative drew worldwide attention, but support for the measure has been sinking, according to recent polls. As late as Tuesday, Oakland City Attorney John Russo – a leading proponent of the pot plan – signaled its fading prospects during a Bay Area press conference.

“Even if we are cheated out of a win today, we have changed the debate from licentious hippies versus straight-arrow cops to one that recognizes this issue in all of its complexity,” Russo said, according to the Los Angeles Times.

California already has a bustling medical marijuana industry, and outgoing Gov. Arnold Schwarzenegger (R) last month signed a new law that essentially lowered the penalty for possession of less than an ounce of pot.

That action by Schwazenegger may have been the action pulled the wind out of the sails of the Prop 19 movement since it made most recreational use of marijuana in California the equivalent of getting a traffic ticket. The debate over legalization is far from over, and the demographics are still in favor of legalizaing pot in the long-term. For the moment, though, the drug warriors have won a victory.