Californians are set to vote on marijuana legalization in November and, this time, it looks like it will pass.

For the second time in six years, California voters who head to the polls in November will have the opportunity to vote on an initiative to legalize marijuana for recreational use. Unlike six years ago, though, it is expected that the measure has a much better chance of passage this time around:

An initiative that would legalize the recreational use of marijuana in California officially took its place on the Nov. 8 ballot on Tuesday as its campaign took a commanding lead in fundraising to battle the measure’s opponents.

The Secretary of State’s Office certified that a random sample showed sufficient signatures among the 600,000 turned in to qualify the measure. The initiative is backed by a coalition that includes former Facebook President Sean Parker and Lt. Gov. Gavin Newsom.

“Today marks a fresh start for California as we prepare to replace the costly, harmful and ineffective system of prohibition with a safe, legal and responsible adult-use marijuana system that gets it right and completely pays for itself,” said Jason Kinney, a spokesman for California’s Adult Use of Marijuana Act.

The initiative would allow adults ages 21 and older to possess, transport and use up to an ounce of cannabis for recreational purposes and would allow individuals to grow as many as six plants.

California would join Colorado, Washington, Alaska and Oregon as states that allow recreational use of marijuana. Eight other states also have marijuana measures on their ballots this year.

More than $3.7 million has been raised so far by the leading campaign for the initiative, Californians to Control, Regulate and Tax Adult Use of Marijuana While Protecting Children. Leading contributors so far have included former Facebook president Sean Parker, legalization advocacy group Drug Policy Action and a committee funded by the firm Weedmaps, a firm that helps consumers locate pot shops.

Opposition is led by the Coalition for Responsible Drug Policies, made up of law enforcement and health groups including the California Police Chiefs Assn., the California Hospital Assn. and the California State Sheriffs’ Assn. The groups warn legalization will lead to more drugged-driving and allow dealers of harder drugs to have a role in the new industry.

The coalition has raised about $125,000 so far from groups including the Assn. of Los Angeles Deputy Sheriffs State PAC and the Los Angeles County Professional Peace Officers Assn.

A similar coalition helped defeat the last legalization measure in California, Proposition 19, in 2010.

“This campaign will be very similar to that of Proposition 19. They have the money and we have the facts,” said Tim Rosales, a spokesman for the opposition coalition.

Rosales noted that under current law, convicted methamphetamine and heroin dealers are banned from being involved in the medical marijuana industry, but the initiative overturns that ban and lets those felons obtain licenses to sell recreational marijuana.

“The proponents were specifically advised by numerous law enforcement groups during the comment period about this huge flaw, but they deliberately chose to keep it in, and you have to ask ‘Why?'” Rosales said. “Who is that provision for? They got it wrong.  Again.”

At a conference last week hosted by the National Cannabis Industry Assn. in Oakland, business people and activists were upbeat about the chances of the initiative passing, even though a similar measure in 2010 was defeated, with 53% of voters casting “no” ballots.

Advocates say the new measure has a better chance because it adds more regulation at the state level rather than letting locals dictate what happens, and comes after the state has approved a regulatory system for medical marijuana growing, transportation and sales.

As noted, California is one of at least eight states that will have marijuana initiatives on the ballot this year:

Eight states, including California, will vote to legalize weed either for recreational or medical purposes in November.

The legalization of marijuana for recreational use will be on the ballot on Nov. 8 in California, Nevada, Arizona, Massachusetts and Maine, according to Allen St. Pierre, executive director of the National Organization for the Reform of Marijuana Laws, or NORML. Legalization for medical use will also be on the ballot in Florida, Missouri and Arkansas on that same day.

“This is really a watershed year for marijuana legalization, so I’m hoping that we’ll see some big changes in November,” said F. Aaron Smith, co-founder and executive director of the National Cannabis Industry Association.

Smith said he’s “especially excited” about California. It’s the most populous state in the country and the sixth largest economy in the world, surpassing France.

“California really is the linchpin for hemispheral legalization,” said St. Pierre of NORML, hoping that a green light in California could trigger a snowball of legalization throughout the country.

California Secretary of State Alex Padilla confirmed on Tuesday that the legalization initiative exceeded the 402,468 signatures required to put the issue on the ballot.

This isn’t the first time that California voters have been asked to consider whether or not to fully legalize marijuana after the state legalized it for medical purposes all the way back in 1996. In 2010, a legalization initiative was on the ballot in the nation’s most populous state and was even leading in the polls before falling behind and ultimately failing to pass by the time Election Day rolled around. One of the reasons that initiative failed, though, was because was because it would have allowed individual jurisdictions in the state to opt in or out of legalization at their choice, thus creating something of a patchwork of legal uncertainty that would keep some people in a world where marijuana was still illegal while other parts of the state opted for legalization. Many members of law enforcement, as well as Governor Arnold Schwarzenegger, argued against this kind of patchwork because of the difficulties it would create for law enforcement officers. This version would eliminate the idea of a different status for marijuana in different parts of the state and legalize it statewide which, in the end, is really the only thing that makes sense.

In addition to this year’s initiative being substantially different from the one that failed in 2010, there are several other factors that suggest a better outcome for the pro-legalization forces. First of all, polling this time shows much stronger support for the idea of legalizing marijuana. A recent poll in the state, for example, shows that some sixty percent of voters support legalization, and the latest national poll conducted earlier this year found that 56% of Americans supported legalization, while a Gallup poll from October put the number at 58%. Additionally, in the years since California voters rejected the last legalization initiative, four states have fully legalized cannibas while even more have decriminalized it to the point where being caught with it results in a offense equivalent to a traffic infraction or have legalized it for medical purposes. In California itself, for example, marijuana has been legal for medical use since 1996 and was officially decriminalized in 2010 around the same time the initiative was on the ballot. All of these legal moves have shown that the alleged negative impact of legalization claimed by opponents have not transpired and that the states where pot has been made legal have in fact seen significant increases in tax revenue thanks to the move. Finally, the electorate that will be coming to the polls on Election Day this year is likely to be far different from the one that went to the polls in 201o. Specifically, it is likely to consist of more younger voters and others who seem likely to be among those who would support legalization. Given that, the prospects are looking good in the Golden State and elsewhere for a big win for legalization forces.

It goes without saying that a win in California would be a big deal for the nationwide movement to legalize marijuana. The victories in states such as Colorado, Washington, Alaska, and Oregon were significant, of course, and the experience in those states has provided the pro-legalization forces with real evidence in support of their arguments, but adding the nation’s most populous state to the mix would provide real impetus to the national movement precisely because it is California. In more ways than one, California has often been a ‘trendsetter’ state in matters like this, so a win here would likely lead advocates in other states to make similar moves over the coming years and seek to legalize marijuana either via legislative action or the initiative and referendum process. Additionally, it would likely free up more politicians to come out in favor of an idea that, until recently, seemed like one that might never be politically palatable. Before long I suspect legalization will follow the path of the debate over same-sex marriage as more and more states change their laws and public opinion follows along, and while it may be awhile before marijuana is fully legal nationwide, it is clear that this is exactly where we’re headed. 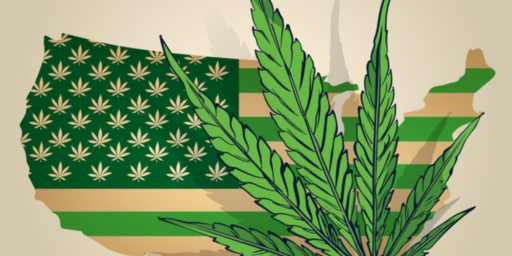