WaPo also has this news:

Racial discrimination by taxi drivers continues to be a major problem in the District despite years of litigation, according to a report by civil rights advocates who say tougher laws and more aggressive enforcement are needed to address a persistent problem.

The study, scheduled to be released today, says thousands of minority residents and visitors each year are unable to get taxis in the District because of the color of their skin or because they live in, or want to travel to, mostly black neighborhoods.

“It is clear that despite the egregious nature of this problem, the District of Columbia’s sporadic efforts over the years to address it have been ineffective and wholly inadequate,” says the report, which was prepared for the Equal Rights Center, a local not-for-profit civil rights group, by the Washington Lawyers’ Committee for Civil Rights and Urban Affairs and the law firm of Hogan & Hartson.

Having been in a few DC-area taxicabs, I’ve never encountered a white driver. It therefore seems unlikely to me that the drivers are anti-minority racists. Further, DC has an overwhelmingly “minority” population, making it a strange choice of business environment if one wants to operate a whites-only cab service. One wonders if this is the type of “rational discrimination” that Dinesh D’Souza wrote about in The End of Racism, with drivers discriminating on more benign factors such as mode of dress and demeanor based on their experience? 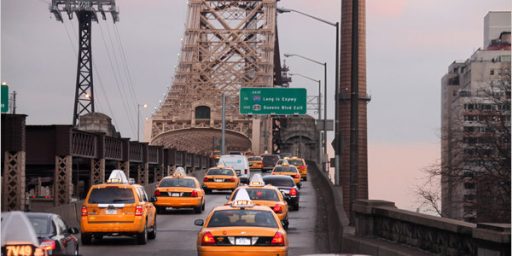