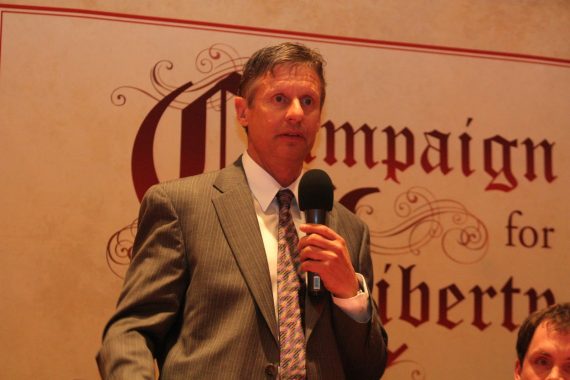 There have been rumors circulating for a month or so now that former New Mexico Governor Gary Johnson was considering leaving the Republican race for the Presidency, where he’s been virtually ignored, and run for the Libertarian Party nomination instead. Now, it appears that may be closer to reality:

Former New Mexico Gov. Gary Johnson will drop out of the race for the Republican presidential nomination and instead seek to run as a Libertarian, according to the Independent Political Report.

The switch, which has been rumored for weeks, is set to be announced Tuesday.

Johnson’s announcement comes as another Libertarian-minded candidate — Texas congressman Ron Paul — has pulled to within one percentage point of front-runner Newt Gingrich in Iowa, according to a poll released Tuesday by Public Policy Polling. But Johnson has never been able to gain traction in the GOP race, having only been invited to two debates.

Discussing the possible move late last month, Johnson told KOB Eyewitness News that the party had been unwilling to help him get included in the debates or polls.

“From what I see and hear on the ground, I think a lot more people embrace this message than not, and the Republicans certainly aren’t even letting me be heard,” Johnson said.

But Johnson believes his message could be better championed as the Libertarian candidate.

“The message wouldn’t be changing at all,” Johnson said. “It’s just a message that hasn’t gotten heard. Really, I feel pretty put off by the process and by Republicans not standing for me … just being in the polls to determine whether or not I should be in the debates or not.”

Johnson hasn’t run a campaign without faults, of course, but it’s kind of hard to get noticed when you aren’t being included in polls and aren’t being invited to debates. Running as a Libertarian isn’t going to make him President, and he may not do any better than former Congressman Bob Barr did when he got the LP nomination in 2008, but he’d be the highest ranking Republican to ever bolt to the GOP and, considering that those Ron Paul voters might be looking for someone to vote for in November 2012.

Earlier this month, described the LP as being more in tune with the American electorate than any other party:

Johnson reiterated his support for the Fair Tax and directed people in the audience to www.fairtax.org to learn more. Johnson promised that as president, he would advocate for a complete scrapping of the current U.S. tax code, going so far as eliminating the I.R.S. and ending payroll withholdings. In place of today’s tax system would be a 23 percent consumption tax – dubbed the “Fair Tax” by its supporters — on all new goods and services.

The consumption tax would be offset by what Johnson terms “prebates,” monthly $200 checks for every American. The annual sum of $2,400 would offset the cost of the consumption tax up to the poverty level, currently calculated at $10,800 for an individual and $22,350 for a family of four….

Johnson said he would consider [being Ron Paul’s running mate if the opportunity arose], but that Paul had signed the Susan B. Anthony Pledge which affirms the candidate’s commitment to “advance pro-life legislation,” according to the language of the pledge.

“I believe in a woman’s right to choose,” Johnson said, adding that he didn’t think he would qualify under the terms of the pledge….

Johnson, who has been excluded from 14 of the 16 Republican debates by what can only be described as “Catch-22” logic, has been the subject of recent speculation that he might end his GOP bid and seek the Libertarian Party’s nomination. Johnson added that by shutting out its libertarian voices, “The Republican Party is abandoning a lot of the electorate. The Libertarian Party is more in tune with the American electorate than any other party at the moment.”

Stay tuned. This could be interesting.