A reporter and cameraman for a local television station were killed, and a third person wounded, live on the air this morning. 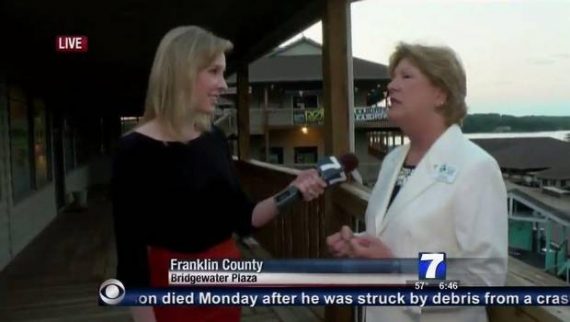 What was supposed to have a short piece on local news regarding tourism in the Roanoke, Virginia area as a reporter and cameraman for CBS affilibe WDBJ were shot and killed live on the air this morning:

BEDFORD, Va. — A man described as a disgruntled former employee of a Virginia television station shot and killed two of the station’s journalists Wednesday morning, recording the act on video himself as the journalists were broadcasting live and then posting the video online.

The filmed shooting marked a horrific turn in the national intersection of video and violence. What appeared to be the gunman’s own 56-second video, briefly posted online, showed him deliberately waiting until the journalists were on air before raising a handgun and firing at point-blank range. He appeared to take particular aim at the reporter, Alison Parker.

The Virginia State Police said Mr. Williams had shot himself after a chase.

WDBJ confirmed that Ms. Parker, 24, and Adam Ward, a 27-year-old cameraman, had been killed.

The Twitter account of Mr. Williams, who is black, referred to a complaint he had filed against the station with the federal Equal Employment Opportunity Commission, claiming to have been subjected to racist comments in the workplace.

Jeffrey A. Marks, president and general manager of the station, confirmed that the complaint had been filed, but said it was dismissed as baseless. Of the racist comments, “none of them could be corroborated by anyone,” he said. “We think they were fabricated.”

He described Mr. Williams as someone prone to angry outbursts without much provocation.

“Eventually, after many incidents of his anger coming to the fore, we dismissed him,” he said. “He did not take that well, and we had to call the police to escort him from the building.”

Discussing Ms. Parker and Mr. Ward on the air, Mr. Marks said, “I cannot tell you how much they were loved.”

Ms. Parker and Mr. Ward were covering a story for WDBJ at Bridgewater Plaza, a shopping and recreational sports plaza on the shore of Smith Mountain Lake, in the Blue Ridge Mountains. They were interviewing a local Chamber of Commerce official, Vicki Gardner, at 6:46 a.m. when the shooting began.

The station’s own disturbing video of the shooting shows Ms. Parker and Ms. Gardner talking. As shots ring out, Ms. Parker screams and jumps backward, and amid jumbled images, the camera falls to the floor. Eight shots can be heard before the camera cuts back to the stunned anchor at the station, Kimberly McBroom.

The video of the shooting – which you can watch at YouTube, although you may not want to — has been making the rounds on social all day, and while the audio of the event is quite jarring the video doesn’t really show very much because everything went out of frame shortly after the first shots rang out. Where the whole event took a bizarre turn, though, was later in the morning after the suspect had been publicly identified when Twitter and Facebook accounts apparently set up by this person started sending out a series of bizarre messages followed by two videos, both apparently shot with a GoPro camera or something similar that showed the shooting from the shooters point of view. In the first video, you can see the shooter approaching the area where interview was taking place without anyone noticing him largely because the cameraman had his back to him and the reporter was engrossed in a discussion with the person she was interviewing. The second video showed the beginning of the shots being fired, which you can also see on the station’s video. There was no doubt whatsoever that these were videos of the shootings themselves and that they had to have been posted by the shooter, or someone who knew him.

While all of this was going, there were all of the usual reports about the search for the suspect, most of which ended up being wrong. What does seem to have been true, though, is that the suspect left the Roanoke area heading north shortly after the shooting because by the time the police caught up with him he was roughly three hours north of Roanoke and within an hours drive of the District of Columbia. The fact that he was apparently able to post things to Twitter and Facebook during this time would seem to suggest that the police really didn’t know where he was until the end of pursuit when his car had been identified. In any case, it appears that this individual was disgruntled former employee who had previously made claims of racial discrimination against the station in general, and possibly these two individuals specifically. After those complaints were dismissed for lack of merit, he apparently became abusive enough to his co-workers that he was fired. An important question, of course, will be whether or not there were any advance warnings that this person could be violent, whether he was under any kind of treatment for mental illness, and whether or not he had made any threats prior to this.

The manner in which this crime unfolded seems to be unique in American history. Unless I’ve missed it, there have been very few examples of reporters being shot live on the air in this manner outside of a war zone, and there certainly haven’t been any examples of killers posting first-person videos of their murders on social media. Watching those particular videos was kind of like watching a first-person shooter video game, except of course it wasn’t a game. The one fortunate thing is that Twitter and Facebook seem to have acted quickly in taking the videos down so hopefully they won’t spread too far. On the other hand, this could end up being the start of a sick new crime trend. What a horrible mess.

Update: The Virginia State Police have informed the press that the shooter, Vester Lee Flanagan a/k/a Bryce Williams, has died from his injuries.