The NYT fronts news that the Republicans are shifting money away from races they will likely lose to those they believe they can win. No, really.

Senior Republican leaders have concluded that Senator Mike DeWine of Ohio, a pivotal state in this year’s fierce midterm election battles, is likely to be heading for defeat and are moving to reduce financial support for his race and divert party money to other embattled Republican senators, party officials said.

The decision to effectively write off Mr. DeWine’s seat, after a series of internal Republican polls showed him falling behind his Democratic challenger, is part of a fluid series of choices by top leaders in both parties as they set the strategic framework of the campaign’s final three weeks, signaling, by where they are spending television money and other resources, the Senate and House races where they believe they have the best chances of success.

Republicans are now pinning their hopes of holding the Senate on three states — Missouri, Tennessee and, with Ohio off the table, probably Virginia — while trying to hold on to the House by pouring money into districts where Republicans have a strong historical or registration advantage, party officials said Sunday. Republicans also said they would run advertisements in New Jersey this week to test the vulnerability of Senator Robert Menendez, one of the few Democrats who appear endangered.

Oddly, the Democrats are doing the same thing. Indeed, this is pretty much what parties always do as elections near.

Further, even in the case of DeWine, it’s not as if there is surrender afoot:

Mr. DeWine has proved to be a successful fund-raiser on his own, and, with $4.5 million on hand, already enjoys a large financial advantage over his Democratic opponent, Representative Sherrod Brown; he is not dependent on financial support to keep campaigning. The Republican National Committee and the Republican Senatorial Campaign Committee have already spent $4.6 million on his race; party officials said they concluded that there were now simply more opportune races to focus on.

So, not only is DeWine lagging in the polls–a bad sign for an incumbent this close to Election Day–but he’s actually got plenty of money on hand. Presumably, if the polls tighten and DeWine gets short on money, the fluidity will move back in his direction and the NRCC will pour money back into that contest.

Today’s New York Times falsely states that the RNC has conceded the Ohio Senate race. As anyone who reads our FEC reports can see, the RNC has spent more money on Ohio than any other state. That level of spending will continue.

The notion that the RNC is pulling out of Ohio is just dead wrong.

Of course, one can’t see the future in FEC reports. But the denial is noteworthy, at least.

Yet again, the Times is completely wrong.

The truth is that liberal Democrats and their allies in the mainstream media are anxious about positive polling for Senator DeWine and about the proven success of our voter mobilization efforts … and they are desperately hoping that Republicans concede Mike DeWine’s seat without putting up a fight.

The truth is that Ohio has been and continues to be one of our highest priorities this November. NRSC Chairman Elizabeth Dole is on the ground in Ohio today and I’ll be there campaigning in the following weeks. As RNC Chairman Ken Mehlman made clear this morning, “No state will receive more resources than Ohio from the Republican National Committee.”

And the truth is that Rep. Sherrod Brown’s record of supporting massive tax increases while opposing the tools needed to fight the War on Terror will be rejected by Ohioans in November — regardless of the mainstream media’s distortions. 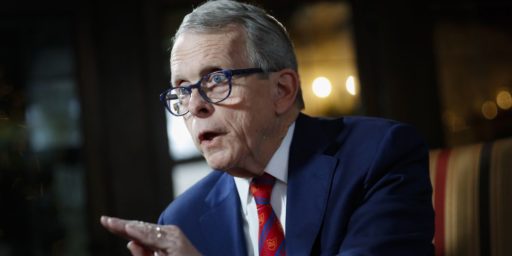