My latest for War on The Rocks, "Professional Military Education and the Rigor Problem, has posted. 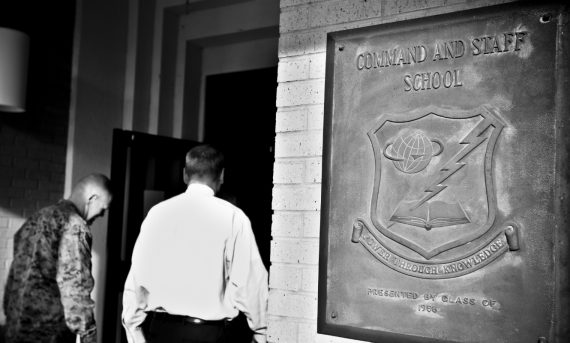 My latest for War on The Rocks, “Professional Military Education and the Rigor Problem, has posted. It’s a response piece and rather inside baseball, making excerpting difficult. Here’s a taste:

While there is undoubtedly substantial room for reform in America’s professional military education (PME) system, measuring “rigor” is much more complex than counting buzzwords in school mission statements. Murray’s essay elides the diversity of the PME experience and substantial distinctions between the intermediate- and top-level schools. Further, much of the problems of measurement he points to are just as apparent, if not more so, in graduate education everywhere. Indeed, it’s arguable that PME is more rigorous by Murray’s standards than most civilian master’s programs.

[T]heir curricula are vetted through an internal review process and subject to outside accreditation by both the same regional body that reviews other colleges and universities in the state as well as by the Joint Staff. At my institution, the Marine Corps Command and Staff College, students in all 16 conference groups are assigned the same set of readings and graded on the same set of written assignments assessed using a standardized rubric. While there’s variation across the board in teaching style, emphasis, grading standards and the like, it’s nothing like what exists in civilian colleges. I’ve taught at several of them and was in every instance the sole arbiter of what readings to assign, what content to teach, what types of graded assignments to offer, and how I would grade them. This was even true of the courses I taught as a graduate student.

Indeed, professional pride on the part of the professoriate is the main guarantee of “rigor” in civilian universities. There’s next to zero emphasis on teaching in most graduate programs, where tenure and promotion are almost entirely based on scholarly production, ability to attract grant money, and the like. Professors would revolt against deans or provosts who even presumed to question the rigor of their courses.

PME, by contrast, is more regimented, for both good and ill. But our faculty, both military and civilian, have very powerful professional incentives to hold our students to high standards. After all, they will plan and lead our country’s future wars.