The theme of Wednesday’s edition of OTB Radio was “Crazy Politics.” Spurred by the bitterness of recent discussion threads on seemingly innocuous topics, Dave Schuler and I wondered where it was all headed.

Well, we got a pretty good clue last night.

Six people were arrested last night in St. Louis  after one of the many town hall meetings going on between Members of Congress and their constituents on the attempt to reform our health care delivery and payment system. It happened about 8:30 p.m at Bernard Middle School on Forder Road in Mehlville. Carnahan, D-St. Louis, had drawn a rowdy crowd that overflowed the school gym and left dozens of people outside. Many of those who showed up at what had been billed as a forum on aging carried signs about the national health-care debate.

Dozens of people were kept out because there was no room for them inside. Members of the local Tea Party Coalition, a movement that has emerged to counter President Barack Obama’s policies, had urged their members to attend, which in turn spurred Democrats to establish a strong presence.

The event was winding down when Majors said she saw a police squad car turn its lights on and went to see what was happening. As she approached it, her eyes started to burn. “And that’s when I realized I’d walked through remnants of pepper spray,” Majors said. She turned her attention to taking pictures. She said she saw a woman in handcuffs who was complaining about the pain of the spray and asking to wash her face and eyes. The response of the officer who was arresting her was, “I warned you,” Majors said.

Two of those were arrested on suspicion of assault, one of resisting arrest and three on suspicion of committing peace disturbances. Carnahan was gone when the ruckus started.

Kenneth Gladney, a 38-year-old conservative activist from St. Louis, said he was attacked by some of those arrested as he handed out yellow flags with “Don’t tread on me” printed on them. He spoke to the Post-Dispatch from the emergency room of the St. John’s Mercy Medical Center, where he said he was waiting to be treated for injuries to his knee, back, elbow, shoulder and face that he suffered in the attack. Gladney, who is black, said one of his attackers, also a black man, used a racial slur against him before the attack started. “It just seems there’s no freedom of speech without being attacked,” he said.

Jim Hoft reports on the incident firsthand and claims that Carnahan’s folks were trying to sneak a thousand “union thugs” from the SEIU into the meeting as a counterweight to the Tea Party Taxpayers.  Of course, this meeting wasn’t supposed to be an open forum about health care but rather a meeting with seniors; thus, neither the protestors nor the union activists should have been there. “There is more consensus than there is disagreement when you get right down to it,” Castor offered, immediately drowned out by groans and boos.

She pressed on, mostly unheard among screams from the audience estimated by Tampa police to be about 1,500.

Thursday’s forum/near riot was sponsored by state Rep. Betty Reed, D-Tampa, and the Service Employees International Union, who apparently had hoped to hold something of a pep rally for President Barack Obama’s health care reform proposal.

Instead, hundreds of vocal critics turned out, many of them saying they had been spurred on through the Tampa 912 activist group promoted by conservative radio and television personality Glenn Beck. Others had received e-mails from the Hillsborough Republican Party that urged people to speak out against the plan and offered talking points.

An overflow crowd of critics was left waiting outside the building — and in some cases pounding on the meeting room doors — while health care reform activists complained that Democrats and union members were guided into the room for prime seats. Tampa police officers maintained control the entire night.

Let’s just say that this is no way for a civilized Republic to conduct its business.  And there’s no small irony that the protestor in St. Louis is carrying a sign mocking the fact that Paul Krugman and others have dubbed these people an angry mob.  What the hell else would you call them?

Regardless, however, we should be able to agree that shutting down public debate on the matter in the guise of “being heard” is not only unproductive but un-American. 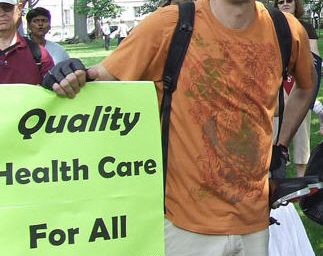