Major metropolitan areas are routinely shut down for presidential fundraisers. 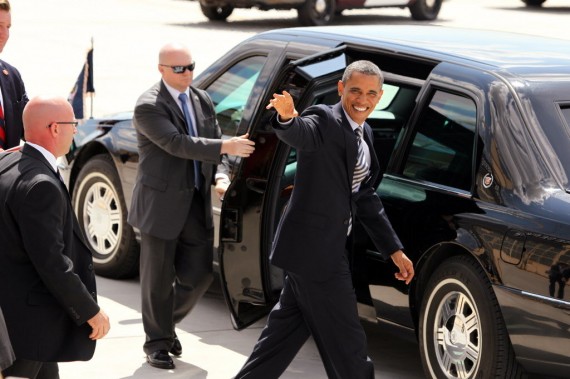 OTB Roving Correspondent Richard Gardner passed on word of President Obama’s visit yesterday evening to his neck of the woods, the Seattle area. While his note was about the area’s heavy concentration of wealth, which makes it a magnet for campaign fundraisers, what really caught my interest was this:

Glad I wasn’t in King County (Seattle + Bellevue) this evening – traffic hell with the Interstates being CLOSED.

It’s bad enough to massively inconvenience that many people for official presidential business. But for a fundraiser?

But sure enough,  both his arrival and departure caused massive traffic nightmares.

Police blocked off the route President Obama took from Bellevue to Boeing Field –  I-405 southbound to I-90 westbound, then I-5 southbound.

The route was not known until about 30 minutes before he and the Secret Service left the Bellevue Hilton, trapping some drivers already on the road in a closure.

Security was tighter compared to the president’s previous departures from Seattle. All Washington State Department of Transportation cameras were blocked as the presidential motorcade traveled to Boeing Field.

Traffic jams built on all three freeways as a result of the closures. Even after Washington State Patrol troopers reopened them, backups continued.

It turns out, the Seattle area wasn’t the onlbothy place impacted yesterday: So was Portland.

Traffic in the immediate area around the Oregon Convention Center was expected to be impacted from approximately 9:00 a.m. through the evening commute on Tuesday, due to a campaign visit by Pres. Obama.

Portland Police said Northeast Martin Luther King Jr. Boulevard would be closed to all traffic from Multnomah Street to the I-84 overpass. Area businesses will have some access for foot-traffic only.

TriMet will close the Convention Center MAX platform and trains will not stop. The Rose Quarter Transit Station and the Northeast 7th and Multnomah stops both will be open. People attending the event should only get off MAX at the 7th Avenue stop to walk to the entrance.

Adding insult to injury, the president wasn’t even expected to land until 11:40. They screwed over tens of thousands of people just for the fun of it.

I did a Google News search for “Obama closes interstate” and found, perhaps not surprisingly, that this is, in fact, a pretty routine occurrence. Seattle, again, May 9th (mass transit was knocked out, too.) Toledo, July 5th. Cincinnati, July 16th. I’m sure I’m missing many such visits.

This isn’t an indictment of Obama personally but rather of the ridiculous security apparatus we’ve built around public officials and the callous disregard with how it impacts the people that said officials supposedly serve. While one imagines that the pace of these activities has increased given the new fundraising environment, previous presidents of both parties doubtless snarled traffic attending fundraisers and other non-essential activities.

Nor am I oblivious to the fact that there’s a reason to be concerned about presidential security. While John Kennedy was the last president murdered in office and that was a half century ago, there have been serious attempts on Ronald Reagan (who actually had a bullet in him) and Gerald Ford more recently. One presumes the tension is higher still given a black president who still hasn’t managed to convince a large swatch of the country that he’s not a foriegn born Muslim socialist.

That said, surely there’s a way for presidents to campaign, raise money, and the like without shutting down entire metropolitan areas for hours on end. Maybe he should travel by helicopter more. Or time his events so that they don’t interfere with predictable rush hour traffic patterns.