Roman Polanski, who fled the United States in 1977 after conviction for raping a 13-year-old, has been arrested in Switzerland and is fighting extradition to Los Angeles.

Polanski, who fled the United States in 1978, was detained Saturday after arriving to receive a lifetime achievement award at the Zurich Film Festival. It was not clear why U.S. authorities had chosen this moment to act on Polanski, 76, a regular visitor to Switzerland with a house here.

“We are going to demand his release and we are going to defend ourselves against the reasons for the extradition procedure,” Herve Temime, Polanski’s lawyer, told French daily Le Figaro. “It seems indefensible that 30 years after the fact a 76-year-old man who has shown no evidence of any danger to society and whose reputation … is well established, can spend a single day in prison,” Temime said.

It’s hardly unusual that someone convicted of a felony who fled the country to avoid punishment would be sought after. But, oddly, this sentiment is shared by WaPo columnist Anne Applebaum, who terms the arrest “outrageous.”

Here are some of the facts: Polanski’s crime — statutory rape of a 13-year-old girl — was committed in 1977. The girl, now 45, has said more than once that she forgives him, that she can live with the memory, that she does not want him to be put back in court or in jail, and that a new trial will hurt her husband and children. There is evidence of judicial misconduct in the original trial. There is evidence that Polanski did not know her real age. Polanski, who panicked and fled the U.S. during that trial, has been pursued by this case for 30 years, during which time he has never returned to America, has never returned to the United Kingdom., has avoided many other countries, and has never been convicted of anything else. He did commit a crime, but he has paid for the crime in many, many ways: In notoriety, in lawyers’ fees, in professional stigma. He could not return to Los Angeles to receive his recent Oscar. He cannot visit Hollywood to direct or cast a film.

He can be blamed, it is true, for his original, panicky decision to flee. But for this decision I see mitigating circumstances, not least an understandable fear of irrational punishment. Polanski’s mother died in Auschwitz. His father survived Mauthausen. He himself survived the Krakow ghetto, and later emigrated from communist Poland. His pregnant wife, Sharon Tate, was murdered in 1969 by the followers of Charles Manson, though for a time Polanski himself was a suspect.

Rape isn’t a tort; it’s a felony. So whether the victim wishes to press charges is irrelevant except as to the practicalities of securing a conviction, which isn’t a problem in this case since Polanski pled guilty.

Patrick Frey, an assistant district attorney in LA whose office is seeking Polanski’s extradition, notes that Polanski “pled guilty to unlawful sex with a minor, in return for the agreement to dismiss several other charges, including rape and sodomy.”  He and a co-blogger remind us of the graphic details of the case, which belie the notion that Polanski is some sort of victim. Let’s just say that the girl in question was drugged and the encounter was otherwise decidedly less than romantic.  See also the victim’s grand jury testimony, which makes clear the sex was forcible and that, even drugged with alcohol and Quaaludes,  she explicitly denied consent.  Which, of course, a 13-year-old can not give under the law.  (In a separate post, Frey notes that Applebaum’s husband is Poland’s foreign minister, who is lobbying for Polanski’s release.)

Oddly, Applebaum’s view on this matter is hardly unique. He’s being portrayed as a hapless victim and a harmless 76-year-old being hounded for no particular reason. And, while I’m generally dubious of putting old men in jail for crimes they committed decades earlier and have shown no propensity to commit again, I’m rather loathe to reward confessed child molesters for fleeing the country.  (Kieran Healy, generally to my left politically, also sneers at Polanski defenders:  “Puritanical Americans simply do not have the enlightened attitude toward wine at the dinner table, quaaludes, and child rape that the Europeans do.”)

Oh, as to the horrible price he’s paid in “professional stigma,”as Applebaum’s own post notes, he was in Switzerland to pick up a lifetime achievement award and had recently won the Academy Award, the highest honor in his industry.  He’s received countless other accolades and has, one presumed, earned millions and lived a life of high luxury.  So, I’m hard pressed to feel sympathy for his three decades of suffering.  Certainly not on the basis of having to avoid countries with extradition treaties to the United States, which would be akin to sympathizing with the murderer of his parents on the grounds he’s an orphan.

UPDATE:  Alex Knapp points me to this quote from Kate Harding, which rather well encapsulates my thoughts:

The point is not to keep 76-year-old Polanski off the streets or help his victim feel safe. The point is that drugging and raping a child, then leaving the country before you can be sentenced for it, is behavior our society should not — and at least in theory, does not — tolerate, no matter how famous, wealthy or well-connected you are, no matter how old you were when you finally got caught, no matter what your victim says about it now, no matter how mature she looked at 13, no matter how pushy her mother was, and no matter how many really swell movies you’ve made.

UPDATE:  David Gibson, bemused that so many in Europe and the Hollywood community share Applebaum’s view, wonders what the reaction would be were Polanski a Catholic priest rather than a filmmaker.

But what if Roman Polanksi were wearing a Roman collar? Would “Monsignor Polanksi” receive the same considerations? As Father Thomas Reese, a Jesuit, writes at the Post’s “On Faith” site, “Imagine if the Knights of Columbus decided to give an award to a pedophile priest who had fled the country to avoid prison. The outcry would be universal.” And rightly so, as Reese says. But Polanski gets an Oscar in absentia in 2003 and earns sympathy because he can’t receive it in person. 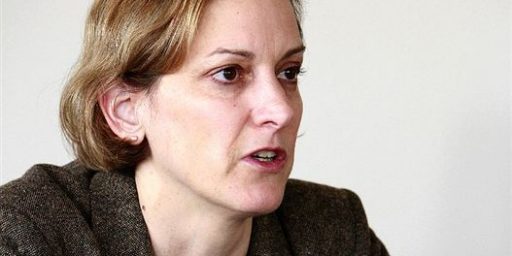 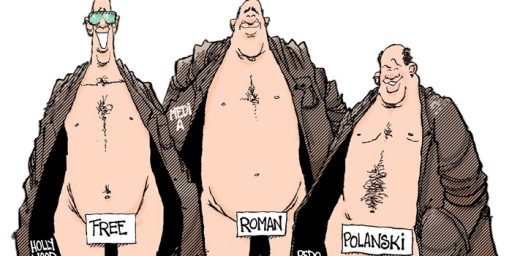