Romney Plays It Safe In Ohio On Public Union Ballot Issue, But Is It Too Safe?

Mitt Romney played it safe on a controversial issue again. 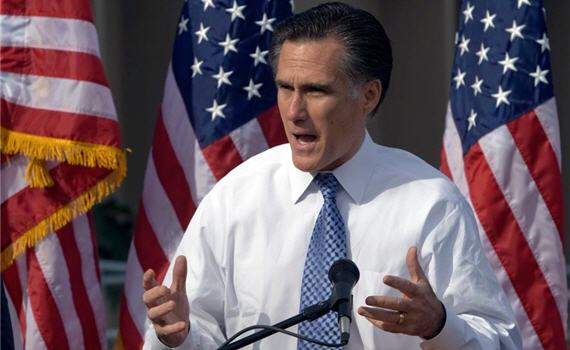 Mitt Romney is drawing some fire from the right after declining to take sides in the ongoing Ohio battle over public union employee bargaining rights:

Republican presidential candidate Mitt Romney stepped into the middle of the charged battle over organized labor in Ohio on Tuesday, but he avoided weighing in on the contentious legislation that would dramatically limit the collective bargaining rights of public sector unions.

The former Massachusetts governor visited an Ohio Republican Party phone bank in the suburbs of Cincinnati, where GOP volunteers were contacting voters about two hot-button measures that will be on the Nov. 8 ballot.

One of them, Issue 2, would ratify Senate Bill 5 – the controversial legislation backed by Republican Gov. John Kasich that curbs collective bargaining rights for public employees.

Another measure, Issue 3, would amend the state constitution to forbid the state and federal government from imposing a mandate to buy health insurance.

Romney expressed generic support for Kasich’s efforts to curtail union rights, but he would not say whether he supports or opposes the specific measures.

“I am not speaking about the particular ballot issues,” Romney said, only after repeated questions from reporters. “Those are up to the people of Ohio. But I certainly support the efforts of the governor to reign in the scale of government. I am not terribly familiar with the two ballot initiatives. But I am certainly supportive of the Republican Party’s efforts here.”

Not surprisingly, Romney almost immediately came under fire from the right for not publicly backing Issues 2 and 3. Within hours, Rick Perry had come out in favor of the ballot measures and made a not-so-subtle jab at Perry:

Texas Gov. Rick Perry took sides Tuesday in the ongoing battle over organized labor in Ohio, coming down forcefully on the side of Republicans who want to drastically limit the collective bargaining ability of public sector unions.

The Republican presidential contender made a point of weighing in on the issue after his rival, former Massachusetts Gov. Mitt Romney, visited Ohio and left questions about his position on an upcoming ballot measure that would overturn the anti-union legislation.

“As a true conservative, I stand with Gov. Kasich in promoting S.B.5 for fiscal responsibility and job creation in Ohio,” Perry said in a statement to CNN. “Gov. Kasich and the Republican leadership of Ohio are to be commended for their efforts.”

Added Perry, “My record as a pro-jobs governor is clear and you don’t have to wonder where I stand.”

Jon Huntsman took to his Twitter account to say “Unlike @MittRomney, I stand with John Kasich in opposing the individual mandate and supporting public sector union reform. “  The Club for Growth and Freedomworks both blasted Romney for refusing to take a stand. The Washington Examiner’s Conn Carroll was more unforgiving:

The Ohio Chamber of Commerce, the Columbus Dispatch, the Cleveland Plain Dealer, Tim Pawlenty, and multiple mayors have all backed Kasich’s law. The Plain Dealer wrote:

Ohio [can’t] pass up this opportunity to break with an unsustainable status quo. Yes, change is scary. But look around: Not changing is even scarier. When they mark their ballots, Ohioans cannot worry about what is best for any political party or interest group — on either side of this debate. They need to consider what’s best for the future of their children, their communities, their state.

If Romney can’t endorse this common sense reform at the state level, why should conservatives believe he will fight against government unions at the federal level.

As was, not surprisingly, Erick Erickson:

The political calculus behind Romney’s seeming reluctance to explicitly endorse SB5 isn’t all that hard to understand, as Walter Russell Mead notes:

Polarizing politics and demonizing state and local government workers is not a good idea.  It is unfair for one thing; it is bad politics for another.  Toxic blue model legacy costs are the problem: rigidly bureaucratic government structures, unrealistic costs, years of underfunded pension plans, regulations that choke growth and initiative, outdated progressive ideas about how change works — these are the roots of our problems, not the middle school teacher down the street or the retired post office worker living modestly on a pension that may be underfunded but is hardly a bonanza.

The fifty year old teacher, fireman or police officer may have been naive to believe his or her union leaders, the politicians and the journalists who all said there was nothing to worry about — but most of those workers cannot be called “greedy” or “selfish”.  They are victims of a complex, multi-player Ponzi scheme and have been lied to by a lot of people for a long time.  They also face some serious financial costs.  Not only are their pensions likely to be less generous and solid than they were led to expect; they may well face layoffs and wage freezes as states struggle to cope with legacy costs.

The  newest Quinnipac poll of Ohio has SB 5 losing by a 52% to 32% margin, and losing every single demographic group except Republicans. Romney’s calculation here is obviously that he doesn’t want to end up on the wrong side of an issue that the vast majority of Ohioans are opposed to. Additionally, Ohio has an open primary so independents, who oppose SB 5 by a 56% to 32% margin, will be able to vote. Much like Hillary Clinton was able to win Ohio by appealing to moderate and independent voters in 2008, Romney obviously believes he has a chance to do the same. So, why take the political risk of explicitly getting behind an unpopular law?

The problem for Romney, of course, is that things like this just reinforce the doubts that conservatives have about Romney, and it provides an opening for candidates like Rick Perry to once again differentiate themselves from Romney. More importantly, it also helps to reinforce the image of Romney as a flip-flopper since he had appeared to support Governor Kaisch’s efforts back in June:

“My friends in Ohio are fighting to defend crucial reforms that the state has put in place to limit the power of union bosses and keep taxes low,” Romney wrote on his Facebook page in June. “I stand with John R. Kasich and Ohio’s leaders as they take on this important fight to get control of government spending. Please visit www.BetterOhio.org for more information.”

The website is devoted to advocating for “Issue 2,” the ballot measure which would ratifiy the collective bargaining legislation passed earlier this year. If the referendum fails, the law would be overturned.

In reality, I don’t think that what Romney said yesterday is all that different from what he said in June, or that he really distanced himself from SB 5 as much as people seem to think. Nonetheless, he did reinforce the perception that many on the right that he’s a squish who will say what he needs to in order to get elected. That may be all he needs to do in the end, but incidents like this are going to make the inevitable rapprochement between Romney and the Republican base all the more difficult.

Update: This morning in Virginia, Romney explicitly endorsed Ohio Senate Bill 5 and the Ohio GOP’s efforts to ratify it via referendum.