That "Romney for Senate" campaign seems pretty much inevitable. 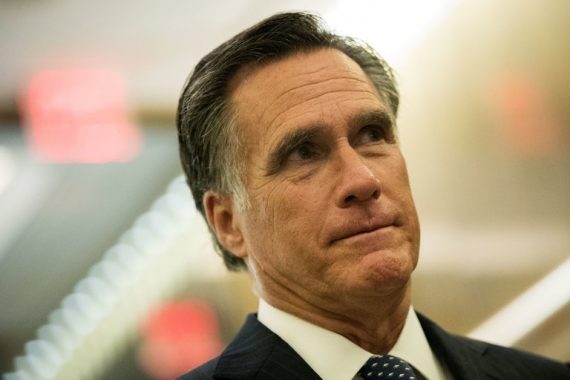 Less than two weeks ago Utah Senator Orrin Hatch announced that he was not running for re-election, an announcement that immediately shifted attention to the possibility that former Republican Presidential nominee Mitt Romney would seek to succeed him as many have speculated. So far, Romney has not made any public announcements about his plans, but he is reportedly telling friends and close advisers that he’s running, the only question seems to be what kind of candidate he would be:

SALT LAKE CITY — A few days after Senator Orrin G. Hatch of Utah announced that he would conclude his tenure after serving 42 years in office, the state’s governor, Gary Herbert, was growing anxious about whether Mitt Romney would run for the seat.

“Let’s not be coy about this,” Mr. Herbert said he told a close Romney friend and prominent business leader, Kem Gardner. “If he’s going to run, let’s go. If not, we need to find somebody else to run, and there’s people that have been trying to queue up for the opportunity.”

Last Saturday, Mr. Gardner called the governor and read from a text that Mr. Romney had offered: “I’m running.”

The political resurrection of Mr. Romney appears unstoppable in a state where he was not raised and where he has not lived for most of his adult life. Mr. Romney, a Michigan-reared former Massachusetts governor, who was successfully treated for prostate cancer last summer, is beloved here as the savior of the Salt Lake Winter Olympics and Mormon royalty.

But if Mr. Romney’s Senate candidacy is inevitable, how exactly he would run and serve is less clear.

His yet-to-be-declared candidacy is already highlighting the enduring fractures over President Trump in this heavily Mormon state, where voters have long been uneasy with Mr. Trump’s conduct. At issue is whether Mr. Romney, the 2012 Republican presidential nominee, should be an overt check on the president, and even use a Senate platform to mount his own White House comeback, or act as an ally and retain access to Mr. Trump the way Mr. Hatch has done.

Mr. Trump won Utah but garnered only 45 percent of the vote, the lowest of any Republican nominee for nearly a quarter-century. The state’s largely conservative voters found his coarse language, treatment of women and contempt for many immigrants and refugees to be anathema to a faith centered on rectitude and forged by exile. About 27 percent voted for Hillary Clinton, and 21 percent voted for Evan McMullin, a Mormon political neophyte who ran as a conservative counter to Mr. Trump.

Utahns saw Mr. Trump as a far cry from his predecessor from four years earlier.

Strolling between buildings at the State Capitol complex, the imposing Wasatch Range looming in nearly every direction, Lt. Gov. Spencer J. Cox sought to explain why Mr. Romney is so formidable that nearly every ambitious major Republican, including himself, is standing down.

“We have a little bit of an inferiority complex in the state of Utah,” Mr. Cox said. “I think it has to do with how we got here. We got kicked out of the country, basically. There was an extermination order. And so we came out here with nothing.”

Gesturing to the elegant State Capitol and booming city at the foot of the mountains, he said, “This was a barren place, and we turned it into this.”

The Romney ancestors were part of the story, back to 1837, when a carpenter named Miles Archibald Romney heard a missionary tell the story of Joseph Smith, Mormonism’s founding prophet.

And because Utah leaders are determined to put on the best face for their state and their church, Mr. Romney’s image is far more important than the particulars of his residency. “All-American family, all-American business acumen, elected governor, ran for president in a respectful way,” as Mr. Cox put it.

A sixth-generation Utahn who will say only that he did not vote for Mr. Trump or Mrs. Clinton, Mr. Cox all but encouraged Mr. Romney to be a voice of opposition when needed.

“I think if he wants to be a check, it won’t hurt him here like it has others,” he said, noting the Republican lawmakers who have been politically damaged for their criticism of Mr. Trump, such as Senators Jeff Flake of Arizona and Bob Corker of Tennessee, both of whom are retiring. “He could do it from Day 1 and he’d be fine.”

Some Republicans here see Mr. Romney’s ascent to the Senate as only the first step. Mr. Herbert said he “can accelerate” and become Senate Republican leader. Daniel Hemmert, a state senator who last year began a Draft Romney effort, went further, suggesting that if Mr. Trump is damaged or does not run again in 2020, the party should turn to the freshman senator from Utah.

Mr. Romney “has to be at the top of that list,” Mr. Hemmert said.

Mr. Trump and Mr. Romney ferociously attacked each other in 2016. Mr. Romney called his successor “a phony, a fraud.”

There was a brief détente when Mr. Romney was considered for secretary of state after the 2016 election.

But after last summer’s violent white supremacist marches in Charlottesville, Va., Mr. Romney demanded that the president apologize for his equivocal response, saying that “what he communicated caused racists to rejoice, minorities to weep, and the vast heart of America to mourn.”

Mr. Trump telephoned Mr. Romney in recent days, and they had a pleasant conversation, according to two White House officials, but, they added, the president did not explicitly offer his support.

Many Republican leaders here are hopeful that the former antagonists can find common ground.

“I think there is a willingness on both sides to say, ‘Look, we may disagree on stuff, we may have problems from our past, but what we ought to be looking toward is our future,'” Mr. Herbert said.

Yet to Mr. Trump’s most vocal supporters — and they exist here as in any state — simply trying to get along is insufficient. The State House speaker, Gregory Hughes, a Pittsburgh transplant, like Mr. Hatch, who practices what he calls “brutal honesty,” said bluntly, “I hope and actually I expect Governor Romney to be an ally of the president and the policies he’s pursuing.”

Mr. Hughes boasted of his early support for Mr. Trump and noted that he had gotten to know the president’s eldest son. He also praised Mr. Romney: “We joke maybe only Jesus can beat him.”

The fact that Romney is apparently getting into the race is hardly a surprise, of course. Even before Hatch announced his intention to retire, the expectation was that Romney would likely enter the race to succeed him has been something of an open secret in Utah politics for some time now. For example, Hatch made it clear last year that he was inclined to retire, but that he was more likely to do so if Mitt Romney agreed to enter the race to succeed him. For his part, Romney made it known that he would only consider running for the seat if Hatch decided to retire. While that speculation died somewhat when there were some signals that Hatch was reconsidering the retirement idea in no small part because of the personal entreaties of President Trump, in the end, though, it seems clear that Hatch was always leaning toward ending his Senate career at this point. Whether or not the assurance that Romney would run to replace him or not played a role is unclear.

As I’ve noted before, assuming Romney does run his victory seems all but inevitable. Outside of Hatch himself, he is probably the most popular Republican in Utah. This can be seen both in recent polling and in the fact that he won the state by nearly half a million votes in 2012, the largest margin of any Republican or Democratic candidate since Utah became a state. Given that, it not only seems likely that he will win both a primary race and the General Election but that he will face at most token opposition from inside the Republican Party and from what passes for the Democratic Party in Utah. The only question will be whether he chooses to serve more than one term in office given the fact that he would be in his late 70s by the time he would need to run for re-election in 2024.

If Romney does run, of course, then there will be much attention paid to the fact that he is known to be a long-standing critic of President Trump’s, something he demonstrated quite well back in March 2016 with a speech during which he openly attacked Trump in a manner that none of Trump’s Republican opponents ever even tried to equal. The prospect of an equally critical Senator Romney in the Senate is reportedly one of the reasons that the President was urging Hatch to reconsider his decision to retire. Since then, he’s spoken out via social media regarding Trump on a number of occasions, including in the aftermath of last July’s protest in Charlottesville, Virginia that led to the death of a counter-protester at the hands of a white supremacist. This has led to much speculation about what kind of campaign he would run and what kind of Senator he would be, with many hoping that he would be the rallying point for those Republicans willing to stand up against the President and his divisive rhetoric. That remains to be seen, of course, but that will be the expectation, and Romney could end up disappointing a lot of people if it doesn’t happen.