The former Trump campaign official made the most of his 15 minutes of fame. 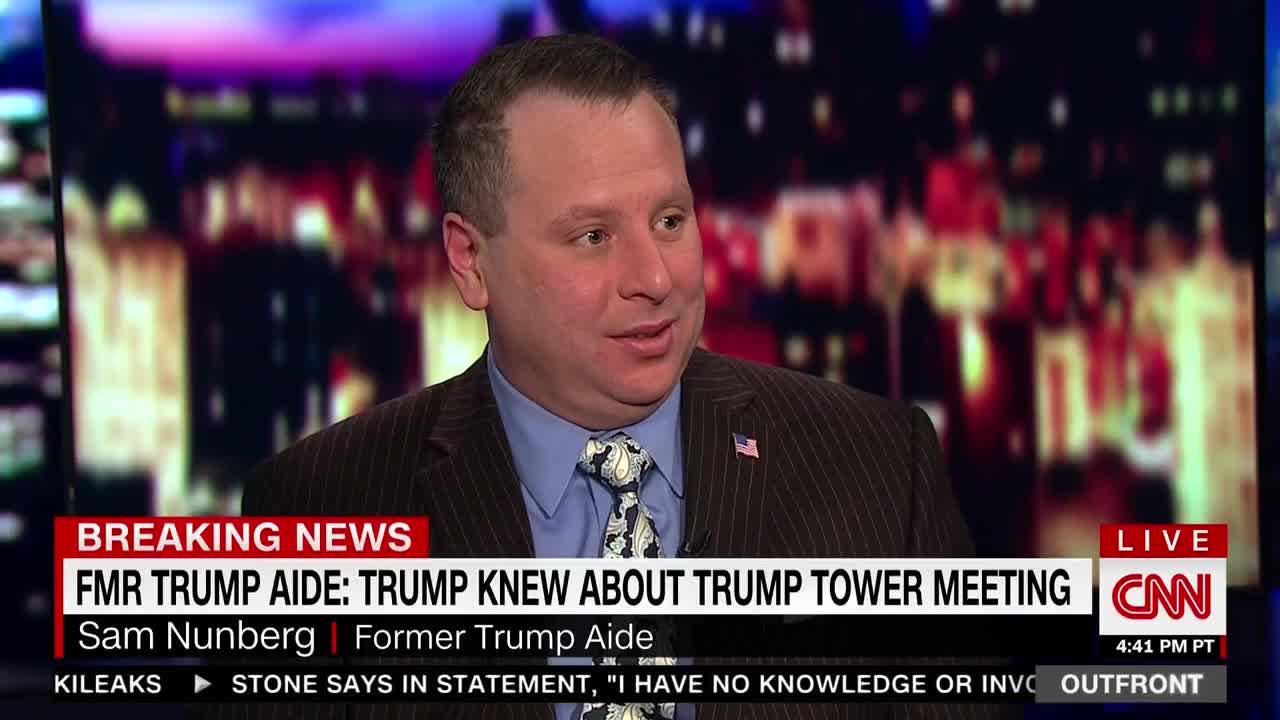 If, like me, you’d never heard of Sam Numberg before now, he made the most of his 15 minutes of fame.

Former Trump campaign aide Sam Nunberg publicly defied the Justice Department special counsel on Monday, announcing in an extraordinary series of media interviews that he had been subpoenaed to appear in front of a federal grand jury investigating Russia’s interference in the 2016 presidential election but that he will refuse to go.

“Let him arrest me,” Nunberg told The Washington Post in his first stop on a media blitz, saying he does not plan to comply with a subpoena from special counsel Robert S. Mueller III to hand over emails and other documents related to President Trump and nine current and former Trump advisers.

“Mr. Mueller should understand I am not going in on Friday” to the grand jury, he added. It is unclear what actions Mueller might take if Nunberg does not appear.

In a remarkable act of rebellion, Nunberg seized the national media spotlight for much of Monday afternoon to denounce Mueller’s investigation as a “witch hunt” and to detail what he said he had learned about the probe from his private interview last month with Mueller’s team. He at times sounded nervous and self-doubting, openly questioning his legal fate. And by Monday evening, he signaled a possible shift, telling the Associated Press he might cooperate with Mueller after all.

Nunberg, a top political staffer for Trump in the run-up to the campaign, was fired in 2015 and has since existed on the fringes of Trump’s orbit as a consultant. White House officials on Monday attacked his credibility and characterized his media appearances as unhinged.

In a series of increasingly bizarre interviews that culminated with a question about whether he had been drinking, former Trump aide Sam Nunberg said Monday that he would not comply with a subpoena from a grand jury that is investigating Russian meddling in the 2016 election.

Nunberg participated in multiple televised, sometimes meandering interviews on MSNBC, NY1, and CNN, repeatedly calling demands to hand over emails related to the investigation and testify before a grand jury “ridiculous.” He also speculated that special counsel Robert Mueller, who is leading the Russia investigation, might have incriminating information about Trump and added that the president’s team is “doing a terrible job.”

Nunberg was fired from Trump’s campaign in August 2015 after racist Facebook messages that he allegedly wrote surfaced. Nunberg told media outlets on Monday that he had been subpoenaed to provide documents and to appear in Washington, DC, on March 9 to testify before the grand jury.

“Screw that,” he told Gloria Borger on CNN.

“I’m objecting to it because I shouldn’t have to spend that much time,” he later told CNN’s Jake Tapper. “I shouldn’t have to go back down to a grand jury. I spent — I’m spending a lot of money on legal fees. A lot of other people are. And, granted, Donald Trump caused this, because he’s an idiot. Because he decided to give an interview to Lester Holt the day after he fired James Comey and then he decided to have the Russians in the Oval Office. You have to explain that one to me, ’cause I’ll never understand it.”

Later in the evening, talking to Ari Melber at MSNBC, Nunberg said that Trump was “the most disloyal person [you’re] ever gonna meet.”

The comments were among many Nunberg made Monday that prompted widespread speculation about his mental state. During Nunberg’s final televised interview of the day, CNN anchor Erin Burnett referenced that speculation, and asked if he had been drinking during the day.

“Talking to you, I have smelled alcohol on your breath,” Burnett said.

“Well I have not had a drink,” Nunberg replied.

Asked moments later if Nunberg had taken “anything else,” he said he had not consumed anything besides his antidepressant medication.

“They can say whatever they want. I don’t care,” Nunberg added about rumors that he could have been intoxicated.

Earlier in that same interview, Nunberg had criticized White House press secretary Sarah Huckabee Sanders, saying she “should shut her fat mouth.” Nunberg repeatedly targeted Sanders on Monday, and during his interview on MSNBC appeared to threaten the press secretary.

“And I’m warning her by the way to shut her mouth,” Nunberg said.

It has been all about Sam Nunberg on cable news today following his announcement that he wasn’t going to appear in front of a federal grand jury on the Russia investigation, essentially snubbing his nose at Special Counsel Robert Mueller.

During his interview with CNN’s Erin Burnett, he reiterated his belief that Mueller has something on President Donald Trump. After telling Burnett that he thinks it may have something to do with Trump’s businesses, Nunberg took the opportunity to take a shot at pro-Trump cable news hosts.

“I just got a feeling he did something,” he told Burnett. “By the way, you’re going to be fine when it comes out what he did but people like Sean Hannity, Lou Dobbs, Jeanine Pirro — they’re gonna be very embarrassed.”

Sam Nunberg, an early political adviser to Donald Trump, had a very public meltdown on Monday afternoon, repeatedly daring special counsel Robert Mueller to greenlight his arrest and insinuating that his old boss, the president, did indeed do “something” wrong during the campaign.

“You know [Trump] knew about it,” Nunberg said at one point during an interview with CNN, of the infamous Trump Tower meeting between campaign officials and a Russian lawyer. “He was talking about it a week before…I don’t know why he went around trying to hide it.”

Rarely, if ever, has a political operative acted so brazenly when facing the very real prospect of being tossed in jail. Nunberg seemed not to care about how the chips would fall. But several of his friends told The Daily Beast they were concerned that he was putting himself in severe legal jeopardy by going on multiple live cable-news programs Monday afternoon.

They also said that they were worried Nunberg had been drinking prior to dialing in to MSNBC and CNN.

Starting Monday morning, Nunberg began calling several close associates that he was flatly refusing, at this time, to cooperate with Mueller’s investigation into alleged Russian meddling in the 2016 presidential election. Three Nunberg friends said they walked away from those conversations fearful that he was “drinking again” and was about to embark on a personal tailspin. They didn’t know it would play out on daytime TV.

CNN’s Chris Cizzilla lists “The 42 craziest quotes from Sam Nunberg’s absolutely bonkers CNN interviews.“  They’re worth checking out in their entirety, as are the video clips at the Buzzfeed and Mediaite links.

Aside from the comedic value—which is yuuge—this isn’t the best look for Team Trump.