Sarah Palin isn't running for President, and she hasn't officially endorsed anyone, but that hasn't stopped her from putting her thumb on the scale. 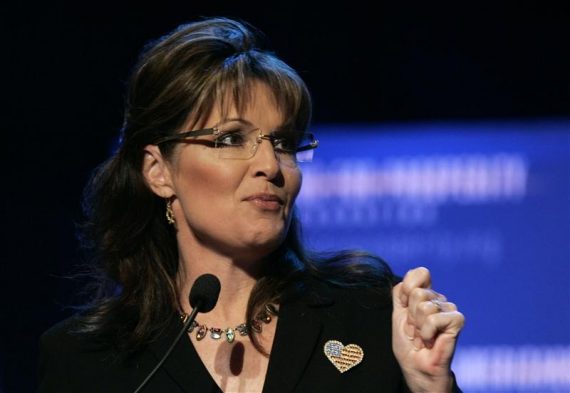 Not surprisingly, Newt Gingrich’s screeds in which he attacks the liberal media and identifies some unidentified “establishment” that he is somehow not a part of despite having been in Washington since 1979 are attracting the attention of that other professional grievance politician:

Newt Gingrich has a new unofficial campaign surrogate and her name is Sarah Palin.

As the 2008 veep nominee sees it, Gingrich is getting a raw deal from the national media and conservative elite, the very same forces who conspired against her when she was on the national ticket. Palin hasn’t endorsed Gingrich — and has no official role in his campaign — but she is repeatedly surfacing at just the right times on the national airwaves to vociferously defend him.

In her latest appearance, Palin stated: “Look at Newt Gingrich, what’s going on with him via the establishment’s attacks,” she said, though the original question was about Ron Paul. “They’re trying to crucify this man and rewrite history and rewrite what it is that he has stood for all these years.”

“They maybe subscribe such characterization of Newt via words like that, but they don’t subscribe those to say Mitt Romney when he or his surrogates do the same thing,” she said. “That’s that typical hypocrisy stuff in the media that I’ve lived with over a couple of decades in the political arena. So I’m used to it.”

“But in order to help educate the rest of the American public, I’ll articulate that it is hypocritical of the media to subscribe to one candidate and not another, that kind of angry attack muffin verbiage to one and not the other.”

Though she declined to run for president in 2012, Palin still has a devoted following among tea party conservatives. Despite her non-endorsement, her views on the race have become crystal clear as she has waged an insistent public campaign for Gingrich that can’t be mistaken for anything but support for the volatile speaker and his ideas. As has usually been the case with Palin, her exact motives remain a mystery. But it does seem like the two Republicans share a common bond in suspecting the media and Washington power brokers are biased against them.

When asked about Palin’s unofficial advocacy for him on Friday, Gingrich’s campaign had no comment.

Earlier this week, when Romney supporter Chris Christie called Gingrich an embarrassment to the Republican Party, Palin suggested that the tough-talking New Jersey Governor had gotten his “panties in a wad.” Christe hasn’t responded to that yet but, if and when he does, I’m sure the words will be memorable. Palin’s latest attempt to insert herself into a race she declined to enter and put her Alaskan thumb on scale for Gingrich came Friday night in a post to her Facebook page (how else?) in which she decried the GOP primary season’s “cannibalism”:

What we saw with this ridiculous opposition dump on Newt was nothing short of Stalin-esque rewriting of history. It was Alinsky tactics at their worst.

But this whole thing isn’t really about Newt Gingrich vs. Mitt Romney. It is about the GOP establishment vs. the Tea Party grassroots and independent Americans who are sick of the politics of personal destruction used now by both parties’ operatives with a complicit media egging it on. In fact, the establishment has been just as dismissive of Ron Paul and Rick Santorum. Newt is an imperfect vessel for Tea Party support, but in South Carolina the Tea Party chose to get behind him instead of the old guard’s choice. In response, the GOP establishment voices denounced South Carolinian voters with the same vitriol we usually see from the left when they spew hatred at everyday Americans “bitterly clinging” to their faith and their Second Amendment rights. The Tea Party was once again told to sit down and shut up and listen to the “wisdom” of their betters. We were reminded of the litany of Tea Party endorsed candidates in 2010 that didn’t win. Well, here’s a little newsflash to the establishment: without the Tea Party there would have been no historic 2010 victory at all.

I spoke up before the South Carolina primary to urge voters there to keep this primary going because I have great concern about the GOP establishment trying to anoint a candidate without the blessing of the grassroots and all the needed energy and resources we as commonsense constitutional conservatives could bring to the general election in order to defeat President Obama. Now, I respect Governor Romney and his success. But there are serious concerns about his record and whether as a politician he consistently applied conservative principles and how this impacts the agenda moving forward. The questions need answers now. That is why this primary should not be rushed to an end. We need to vet this. Pundits in the Beltway are gleefully proclaiming that this primary race is over after Florida, despite 46 states still not having chimed in. Well, perhaps it’s possible that it will come to a speedy end in just four days; but with these questions left unanswered, it will not have come to a satisfactory conclusion. Without this necessary vetting process, the unanswered question of Governor Romney’s conservative bona fides and the unanswered and false attacks on Newt Gingrich will hang in the air to demoralize many in the electorate. The Tea Party grassroots will certainly feel disenfranchised and disenchanted with the perceived orchestrated outcome from self-proclaimed movers and shakers trying to sew this all up. And, trust me, during the general election, Governor Romney’s statements and record in the private sector will be relentlessly parsed over by the opposition in excruciating detail to frighten off swing voters. This is why we need a fair primary that is not prematurely cut short by the GOP establishment using Alinsky tactics to kneecap Governor Romney’s chief rival.

This is all, of course, classic Palin. Attack the “establishment” and the media while defending a Tea Party that she latched herself onto rather than actually helping to create. The irony of deploying that rhetoric in defense of a big government conservative whose record is about as far away from what the Tea Party claims to stand for as possible is apparently lost on the former Alaska Governor. The additional irony, though, is Palin accusing Gingrich’s critics of employing “Alinsky tactics” against the former Speaker. The Republican obsession with Saul Alinksy is something deserving of a post in itself, at least, but it doesn’t take much knowledge about the ideas of the late Chicago community organizer to know that the real Alinskyite in the Republican race is none other than Newton Leroy Gingrich:

Gingrich’s clashes against the establishment are classic Alinsky.

“The job of the organizer is to maneuver and bait the establishment so that it will publicly attack him as a ‘dangerous enemy,'” Alinsky wrote in “Rules for Radicals.” He went on to reveal that, “Today, my notoriety and the hysterical instant reaction of the establishment not only validate my credentials of competency but also ensure automatic popular invitation.”

Though Gingrich has spent several decades profiting from being part of the Washington establishment, the fact that he’s been attacked by so-called “elites” has become self-validating.

And the way he scolded CNN moderator John King in last Thursday’s South Carolina debate followed Alinsky’s 13th tactical rule, which states: “Pick the target, freeze it, personalize it, and polarize it.”

Alinsky argued that a faceless target such as City Hall, or in this case, the mainstream media, isn’t as powerful of a target as individual person. And by “freeze it,” he meant that whoever the target is shouldn’t be allowed to pin the blame on somebody else.

King, as Fox’s Juan Williams did in the prior debate, allowed Gingrich to personalize his attack on the media. And when King tried to claim that it was another network, ABC, that had aired the interview with his ex-wife that had prompted the question about whether he had ever sought an “open marriage,” Gingrich froze the target.

“John, it was repeated by your network,” Gingrich hollered. “You chose to start the debate with it. Don’t try to blame somebody else.”

If anyone has been employing Alinsky tactics over the past four years it’s people like Newt Gingrich and Sarah Palin, and they’ve ironically done it while making Alinsky himself one of their enemies even though he’s been dead for nearly 40 years.

Leaving aside the Alinsky arguments, though, Palin’s argument is just absurd. First of all, to the extent Newt Gingrich has been “attacked” he has been “attacked” with the truth, whether its about his personal life, his tendency to engage in wild flights of fancy disguised as public policy discussions, his tenure as Speaker, the manner in which he single-handedly sought to betray the very Contract With America he asked his fellow Republicans to sign, or his actions in the years after he left Congress in which he sought to profit off his access to the corridors of power and lobby for big government. If this is who Palin and the Tea Party have latched on to as their candidate, then they are even bigger frauds then I thought they were.

Second, drawing distinctions between the candidates is exactly what primaries are supposed to be about.  For some reason, it seems to be fine in the minds of Gingrich supporters like Palin for him to criticize Mitt Romney or Rick Santorum or Ron Paul, but when one of them, and most especially Romney and his surrogates, turns that same tactic back around and aims it at Gingrich, it somehow becomes “cannibalism” as Palin refers to it. This reminds one of the same kind of whining about the “Lamestream Media” that we have heard from Palin for years, along with a health dose of the blame she tried to cast on the McCain campaign staff for her own quite obvious failings as a Vice-Presidential candidate in her efforts to create an alternative history of the 2008 Presidential Campaign. If the “attacks” on Gingrich are truthful, and they have been, then there is absolutely nothing wrong with Romney and his supporters, or anyone else who happens to think that Newt Gingrich should not be the Republican nominee for President, from making them. It’s up to the voters to decide how to evaluate them. That is what democracy is all about, isn’t it?

Embrace the competition, candidates, that’s what politics is all about. As for Ms. Palin, well, one wonders when she will realize how irrelevant she’s actually become.