Antonin Scalia says "The only question in Bush v. Gore was whether the presidency would be decided by the Florida Supreme Court or the United States Supreme Court." 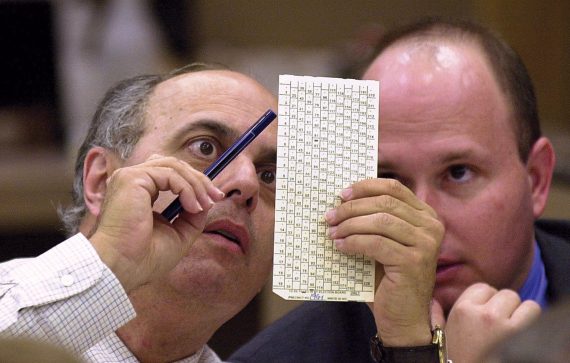 Lest the comment thread on Antonin Scalia’s discussion about the relationship between Supreme Court Justices get highjacked, I’ve decided to highlight his remarks on the most controversial case of the modern era separately.

Scalia also said in the interview that the case that brings about the “most waves of disagreement” is still the decision that decided the 2000 presidential election between George W. Bush and Al Gore. But the justice said his normal answer to people who ask about Bush v. Gore is “get over it.”

Scalia said he had no regrets about the court’s decision.

“No regrets at all,” the justice said. “Especially because it’s clear that the thing would have ended up the same way anyway. The press did extensive research into what would have happened if (what) Al Gore wanted done had been done, county by county, and he would have lost anyway.”

Scalia is certainly right about the sequencing. Despite the oft-expressed lament of Democrats that “the Supreme Court handed the 2000 election to Bush,” the fact of the matter is that Bush won the initial counting of ballots in Florida, won the mandatory mini-recount, and was certified as the winner by Florida’s (Republican) secretary of state.  It was, therefore, Al Gore who had to sue if he were to overturn that result and become president.

But the SCOTUS case was Bush v Gore, not Gore v Bush. That means Bush was the plaintiff. Why? He was seeking to overturn a decision made by the Florida Supreme Court to conduct additional recounts in violation of  Florida statutory law.

While I have some misgivings about the reasoning in the opinion, especially the notion that it was a one-off with no precedent, I thought at the time and still think that they got the outcome right. First, I agree with Scalia that, given the stakes, it should have been the US Supreme Court, not the Florida Supreme Court, that made the call. Second, I thought and think that the process mandated by Florida’s Supreme Court was unfair on technical grounds as well as an illegal change of the rules after the game was played. Third, I thought and think that more people in Florida successfully voted for Bush than Gore.  (Incidentally, I also think it likely that more people in Florida intended to vote for Gore than for Bush. While I think that has some moral weight, I don’t think it has any legal weight.)

As to the media recounts, Scalia is also right, up to a point.

In the first full study of Florida’s ballots since the election ended, The Miami Herald and USA Today reported George W. Bush would have widened his 537-vote victory to a 1,665-vote margin if the recount ordered by the Florida Supreme Court would have been allowed to continue, using standards that would have allowed even faintly dimpled “undervotes” — ballots the voter has noticeably indented but had not punched all the way through — to be counted.

Note, though, that Scalia chose his words with lawyerly precision. Bush would have won using the method Gore asked for and that the Florida Supreme Court mandated. But . . . .

While the USA Today report focused on what would have happened had the Florida Supreme Court-ordered recount not been halted by the U.S. Supreme Court, the Herald pointed to one scenario under which Gore could have scored a narrow victory — a fresh recount in all counties using the most generous standards.

In their reports, the newspapers assumed counts already completed when the court-ordered recount was stopped would have been included in any official count. Thus, they allowed numbers from seven counties — Palm Beach, Volusia, Broward, Hamilton, Manatee, Escambia and Madison — to stand, but applied the most inclusive standards to votes in the rest of the state. If those numbers did not stand, the Herald reported, a more generous hypothetical revisited recount would have scored the White House for Gore — but with only a 393-vote margin.

Under most other scenarios, the papers reported, Bush would have retained his lead.

Note that the Bush team had argued that the only fair way to do a recount would be to conduct it state-wide using the same rules. Under that scenario, Gore would have won—although only if counting dimpled ballots. Using the legislatively mandated means of counting—successfully disengaging the chad entirely for one and only one candidate—Bush would have won.

Given that this was the standard Florida law required and Florida voters were instructed would be applied ahead of the balloting, it seems obvious to me that it’s the standard that should have applied. To me, changing the rules after the game is played—where the judges and election officials know the outcome and how many votes they need to flip—is simply unconscionable.

Additionally, the potential for mischief and inevitable sense of illegitimacy that comes when initial results are overturned makes me leery of any recount process. Absent demonstration of fraud or systemic error, there’s no reason to be more confident in a second count than a first one. Indeed, there’s less given that, on the second go-round, those doing the counting know how many votes they need to steal to give their guy the election.