Should Lawmaking Be Left to Congress?

Should the Legislature take back legislating from the Executive? 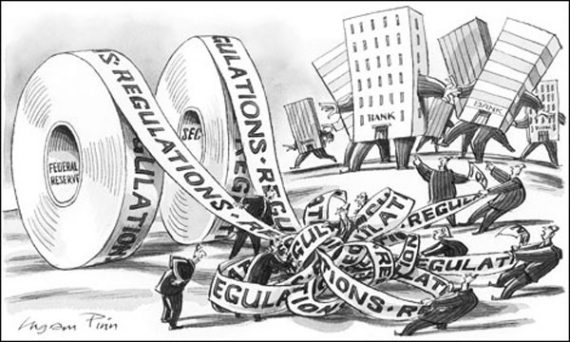 Dave Schuler points me to George Will‘s endorsement of something called the REINS Act as one of “six measures concerning practical governance and constitutional equilibrium” Republicans should pass once the take over both Houses of Congress in January. Leaving aside questions of whether 54 or 55 Republican Senators will actually be able to pass legislation in a system that now requires a 60 vote supermajority for virtually everything, the Act seems reasonable enough on its face. As described by Will:

Pass the Regulations from the Executive in Need of Scrutiny (REINS) Act. It would require that any regulation with at least a $100 million annual impact on the economy — there are approximately 200 of them in the pipeline — be approved without amendments by a joint resolution of Congress and signed by the president. “In effect,” writes the Hudson Institute’s Christopher DeMuth, “major agency rules would become legislative proposals with fast-track privileges.” By requiring legislative complicity in especially heavy federal burdens, REINS is an ingredient in the recipe for resuscitating Congress, which has been far too eager to cede legislative responsibilities to the executive branch.

Like Dave, I was heretofore unfamiliar with this bill. But The Hill reports that the House passed it in August of 2013 and, in fact, was “the latest incarnation of legislation that has been introduced in each of the last three Congresses.” They also report that the Obama White House has threatened to veto the bill were it to pass.

As the economy has gotten more complicated and the scope of government has grown, Congress has effectively ceded the vast majority of the authorities enumerated to it in Article I of the Constitution to extra-constitutional regulatory agencies in the Executive Branch. Theoretically, Congress still passes laws outlining broad policies with the experts in the agencies simply fine-tuning the execution of the laws; in reality, we’ve reversed the polarity of lawmaking, with the Executive serving as a quasi-legislative branch and the Legislature wielding a veto power through the oversight process.

James Gattuso, a senior fellow in regulatory policy for the conservative Heritage Foundation, extolled the bill three years ago.

REINS would significantly change the way regulations are imposed. Congress would no longer be able to pass hazy legislation and disclaim further responsibility. By increasing Congress’s accountability for regulatory policy, it would end the shell game for responsibility that Members have long played. Requiring explicit congressional approval for new rules is no panacea for excessive regulation, but it is a common-sense step forward.

Firm action by Congress to rein in costly regulation is sorely needed. Over the past few years, the cost and number of new regulations have increased dramatically. This increase did not begin with President Obama, but it has accelerated markedly during his tenure. From inauguration day 2009 through March of this year, regulatory agencies imposed some 75 major new regulations (defined as those costing $100 million or more), imposing some $38 billion of new costs annually on the economy and consumers.[1]

This is on top of the continuing burden of the existing stock of red tape, which has been estimated at some $1.75 trillion per year.[2] This burden not only increases costs for consumers but hinders enterprises from growing and jobs from being created.

Let’s stipulate that Heritage is anti-regulation and that the figures are hotly disputed. But his explanation for why REINS is needed makes sense”

Of course, Congress has always had the constitutional authority to control the growth and reach of federal regulations. The thousands of rules and regulations adopted each year originate from the powers delegated through legislation to agencies by Congress itself. These rules can always be revoked or modified by subsequent legislation passed by Congress and signed into law by the President. And Congress has used this power in the past in particularly egregious cases.

The process is a cumbersome one, however. In an attempt to make it easier for the legislative branch to exercise its authority over regulatory policy, Congress in 1996 enacted the Congressional Review Act (CRA). This act created expedited or “fast-track” procedures for voiding proposed rules, ensuring an up-or-down vote in the House and the Senate on “resolutions of disapproval.”

The CRA, however, has been successfully used only once to stop a rule, and that was a decade ago, when a Labor Department rule promulgated by the Clinton Administration was rejected shortly after President George W. Bush was inaugurated. A major problem is that a CRA resolution—like all other legislation—must be signed by the President, and few Presidents are keen on reversing the work of their own appointees. Knowing how hard it is to obtain a President’s signature to reverse his own regulators, Members of Congress are reluctant to even attempt to reverse a rule under the CRA.

A deeper problem is that many Members of Congress are reluctant to accept responsibility over rulemaking. Under present practices, they get to take credit for enacting popular but vague legislation, but then can plausibly deny responsibility for the specific regulations that follow. The result is power without accountability—a useful result politically but an abysmal one for policymaking.

The REINS Act would end this game by requiring every major rule (those with an economic effect of $100 million or more annually) to be specifically approved by the House and Senate (as well as the President)before the rule takes effect. This would help ensure not only that regulators are exercising their delegated powers in a way consistent with the intent of Congress but that Congress itself can be held accountable for the regulations and consequences of that result.

Kristina Costa of the Center for American Progress offers the liberal retort. It’s not a strong one:

REINS would turn a regulatory process currently driven by scientific expertise, industry input, and careful cost-benefit analysis into a political circus. While agencies are not immune from political influence, they must have legal justifications for the rules they promulgate, and those justifications must stand up in a court of law when challenged. But under REINS, either chamber of Congress—or even a single senator—could effectively overturn a law by refusing to approve critical rules of implementation for entirely political reasons.

She overstates the case there, at least in terms of the most recent version of the bill. Whatever the 2011 version said, the 2013 iteration required an up-or-down vote; this wouldn’t be subject to a hold or filibuster in the Senate. That a majority vote in either chamber could kill costly regulation is a feature, not a bug. That politics would trump “scientific expertise, industry input, and careful cost-benefit analysis” may well be the outcome of this bill going into law; but that’s democracy for you.

The REINS Act would undermine the system of checks and balances essential to our shared democracy. Under REINS not only would a law need to first pass both chambers of Congress and be signed into law by the president, but any major rules designed to implement that law would need to be approved by both chambers as well. That means that one chamber could effectively overturn a law by refusing to grant approval to essential rules of implementation. In this way, the REINS Act constitutes a radical and unprecedented move away from democratic governance.

But that doesn’t make sense. Congress may very well want to achieve some vague outcome—clean air or preservation of animal habitats, say—but oppose some particular implementation conceived of by regulators. For that matter, since most legislation doesn’t sunset, an act passed during a very different political consensus could spawn regulations years or even decades later. Why shouldn’t Congress get to have a say on that again?

Writing regulations requires detailed technical, economic, and legal knowledge. Whether a regulation is enacted or not shouldn’t be contingent on the opinions of 535 elected officials who lack expertise in the relevant scientific, technological, and economic matters. Major rules are frequently revised based on input from lengthy public comment periods and often-contentious lawsuits. And, while Congress boasts 24 members with medical degrees, an astronaut, an NFL quarterback, and a tugboat captain, there aren’t very many scientists (three), engineers (six), or economists (zero) currently serving terms in the nation’s legislature.

Gattuso has a fair counterpoint:

Critics also argue that the REINS Act would displace regulators’ “expert” judgment with political decisionmaking. For example, Sidney Shapiro of the Center for Progressive Reform writes that congressional action “is likely to be nakedly political, reflecting the raw political power of special interests,” while agency actions “are backed up with reasonable policy determinations.”[4]

But outside of political science textbooks, that is not how government works. Regulators have their own special interests and political agenda and are hardly objective. Anyone who doubts that should spend an hour at the Federal Communications Commission and watch the lobbyists flow in and out.

This is not to say that regulators and Congress necessarily see the world in the same way. Since Members of Congress must regularly face the voters, they have a different perspective than appointed regulators. Therefore, some rules will be turned back as unacceptable. But that is not a flaw in the process; it is an important feature. Simply put, no rule should be adopted if the American people, as represented by Congress, do not agree that it is appropriate.

There are thousands of bills and resolutions introduced each year in Congress, and the House and Senate take hundreds of recorded votes. According to a report by the nonpartisan Congressional Research Service, there were about 100 “major” regulations finalized in 2010. The REINS Act ostensibly limits debate to 10 hours for each joint resolution of approval. That would add up to an extra 1000 hours of debate each year. Even if Congress were in session for all 52 weeks of the year—and they are not—an extra 1000 hours would tack nearly 20 hours of floor time onto each week. That’s not just impractical, it’s impossible.

A “major” or “economically significant” regulation is one that has an estimated annual economic effect of $100 million or more. Economic effects are not limited to the costs of implementing something: they can be the result of net benefits, or the transfer of funds from the government to citizens, or an expected increase in consumer spending. A recent report by the nonpartisan Congressional Research Service examines all of the 100 “major rules” finalized in 2010. In their analysis, some federal agriculture subsidies were categorized as “major rules.” So were Medicare and Medicaid payments, fees for passports, and the Department of Education’s Investing in Innovation (i3) Fund. All of these rules would require a round of Congressional approval under REINS.

There are workarounds here, in that committees and subcommittees would be responsible for initial review and, theoretically at least, some substantial number of the 100-odd regulations would be sufficiently uncontroversial to simply be passed by consensus without the need for 10 hours of floor debate. Still, we’ve seen how Congress actually operates in recent years; there’s little reason for confidence in their being reasonable. 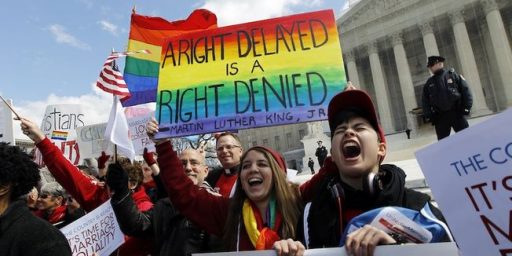