The government shutdown is beginning to negatively impact the public's perception of the health of the economy. 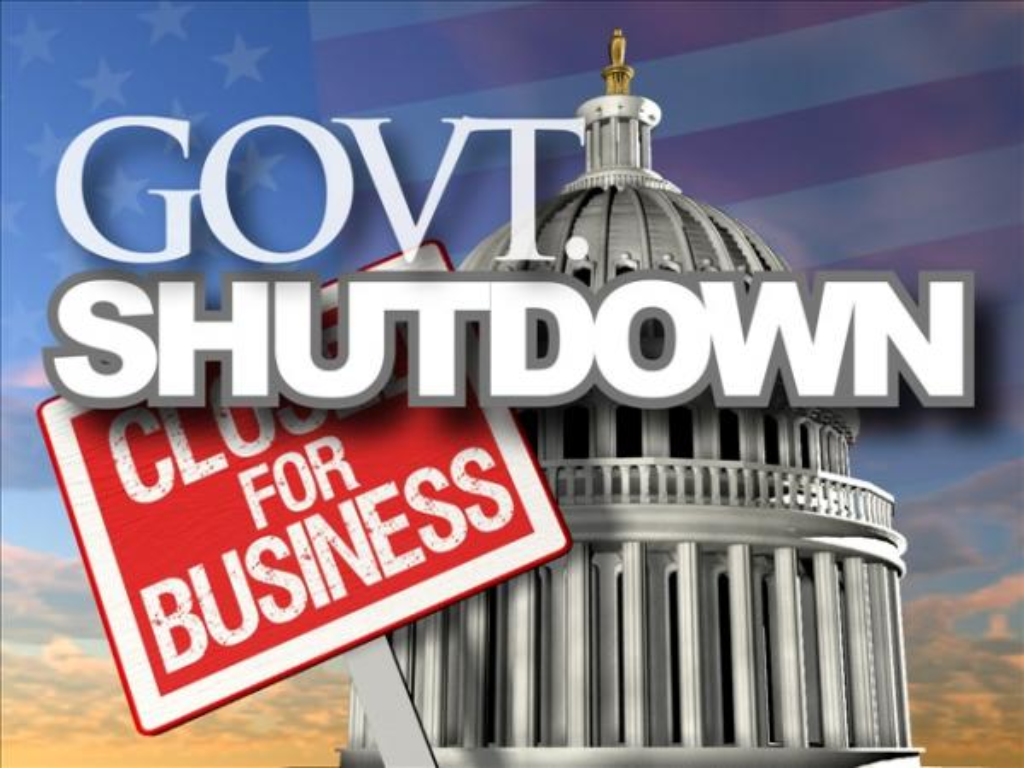 A new poll indicates that the Government Shutdown, which has now hit thirty-two days, is eroding faith in the economy:

WASHINGTON — The government shutdown and a late-year slump in the stock market have eroded Americans’ optimism for the economy and support for President Trump’s economic policies, new surveys show.

The decline in confidence is widespread — among Democrats and Republicans, high and low earners — and it suggests mounting danger for Mr. Trump and the economic expansion that he claims as a strong point of his presidency. Sustained drops in confidence often signal dampened consumer spending in the months ahead, and can be the precursor to broader economic downturns.

On Friday, the University of Michigan’s consumer sentiment index fell to the lowest point of the Trump presidency, well below forecasters’ expectations. Analysts attributed the drop largely to the partial government shutdown, which has entered its fifth week.

Economic confidence also fell, across nearly all demographic groups, in a poll conducted this month for The New York Times by the online research firm SurveyMonkey.

“If you have that many people in the economy that are not getting paychecks, are not able to pay their rent, pay their mortgages, there’s going to be a broad macroeconomic impact,” said Kevin Stay, a 27-year-old survey respondent in Pittsburgh. “That’ll affect everything. It’ll ripple through the economy.”

Business groups on Friday called on the president and Congress to reopen the government immediately.

“The current shutdown — now the longest in American history — is causing significant and in some cases lasting damage to families, businesses and the economy as a whole,” the groups wrote in a letterposted on the website of the U.S. Chamber of Commerce.

The SurveyMonkey poll found that Americans remained relatively upbeat about their personal finances, particularly Democrats and independents, whose assessment of their family’s economic situation has brightened since the November elections. But a wide swath of respondents reported increasing worries about the economy over all.

Nearly a third of respondents to the poll said the United States economy was worse off than it was a year earlier. That’s up from fewer than a quarter of respondents in January 2018. And respondents were nearly as likely to say the next five years will bring “periods of widespread unemployment or depression” as “continuous good times economically.” As recently as November, optimists outnumbered pessimists on that question by more than 10 percentage points.

The Michigan survey found something similar: Respondents were still fairly positive about the current economy but were far more negative about the future.

By most conventional measures, the economy is still doing well. The unemployment rate is near a five-decade low, wage growth is accelerating, and overall economic growth in 2018 was on track to be the strongest since before the 2008-9 recession.

But cracks had begun to show even before the shutdown idled hundreds of thousands of federal workers shortly before Christmas. The stock market dropped precipitously late in the year as investors became concerned about the effects of a trade war with China, among other factors, and the housing market has slowed. Many economists had already expected growth to slow in 2019 as the effects of the tax cuts that took effect last year begin to wane.

Those fears seemed to have little effect on consumers, whose spending powered a strong holiday shopping season and fueled economic growth for much of last year. Any hints that consumers are growing jittery are worrisome, said Stephen Stanley, chief economist for Amherst Pierpont Securities.

“The consumer’s really the star of the show right now, and if you were to see any signs of a break there, it would be significant,” Mr. Stanley said.

As the article goes on to note, one of the issues that economists and analysts are facing in trying to measure the impact of the shutdown is that the shutdown itself is having an impact on the release of economic data that would give us an idea of where things are headed. This is largely due to the fact that the government workers charged with collecting and reporting the data are not working because they are furloughed due to the shutdown. For example, the retail sales report that was supposed to be released by the Commerce Department last week was not released and it’s unlikely that the upcoming reports on personal spending and saving will be released either. It’s also possible that the shutdown if it continues, could impact the accuracy or the availability of higher profile reports like the initial estimate of Gross Domestic Product for the final quarter of 2018, which is due next week, and the jobs report, which is due on February 1st. All of this will make economic forecasting more difficult not only for Wall Street but also for businesses, the Federal Government itself, and for the Federal Reserve Board, which relies in part on data produced by the Federal Government to guide its decisions on interest rates.

As it turns out, the public perception isn’t far off from where the economy actually is, as CNN reports that the shutdown is coming at precisely the worst time for the domestic and world economies:

None of the 21 government shutdowns since 1976 made a real dent in the economy — purchases were simply delayed until the government re-opened and federal workers regained their lost wages.

This time is already different.

Businesses are warning investors that the nearly month-long shutdown has taken a chunk out of revenues that they might never recoup, like the $25 million that Delta Airlines lost in January because of fewer bookings than anticipated.

Even the White House acknowledged this week that the effects are worse than anticipated.

“We’ve been watching the actual effects, and noticing that the impact that we see on government contractors is bigger than the sort of staff rule of thumb anticipated,” White House Council of Economic Advisers chairman Kevin Hassett said Tuesday. “And we subsequently, right now, think that it’s about a tenth of a percent a week, not a tenth of a percent every two weeks.”

This shutdown comes at a time when consumers and businesses were already starting to worry about a downturn on the horizon, and government dysfunction makes everyone more risk averse.

“I don’t think it’s an impact of people who are missing paychecks,” says Lawrence Yun, chief economist at the National Association of Realtors. “It’s more about people becoming more uncertain about the direction of the economy, this perception that there’s chaos in Washington.”

In response to a survey the association conducted last week, 25% of realtors said the government shutdown had dissuaded their clients from buying homes, either because of delays in getting financing through non-functioning government agencies or because of general concern about the economic environment.

That’s a higher number than it’s been during previous federal funding gaps. Historically, Yun says, 2% of buyers ultimately have dropped out of the market — but this time he expects the losses to be higher, at a time when purchases have already been depressed by rising interest rates and low inventory.

In order to keep delayed paychecks from turning into lost sales, some businesses are offering low-cost financing programs to federal employees, counting on their income being backfilled within a few weeks.

Some auto dealers in the hard-hit Washington, DC area, for example, are letting their government customers pay later for service work.

“We’ve been through this before, and everybody knows that eventually these workers will be compensated,” says John O’Donnell, president of the Washington Area New Auto Dealers Association. “What we’re dealing with is a delayed cash flow issue.”

Take the thousands of federal vendors facing a dry spell if their contracts aren’t renewed, and the businesses who depend on federal workers being on the job.

By and large, they aren’t benefiting from the loan forbearance programs banks are now offering to anyone with a federal ID, making it more likely that a cash crunch turns into a major crisis.

“It’s going to be harder for them to extract concessions from their lenders,” says Ian Shepherdson, chief economist at Pantheon Macroeconomics. “If you go bust, you can’t be resurrected. The longer it goes on, the bigger that potential becomes.”

The other negative signs in the economy only exacerbate that effect, he added. “The timing is pretty terrible,” Shepherdson said.
The White House estimates that delayed payments to federal contractors will create a $93 million per day hit to economic growth. That led the Council of Economic Advisers to double its calculations of the shutdown’s impact and revise up its projection of the shutdown’s impact from 0.1% every two weeks to 0.1% every week.

As I’ve noted in the past, much of what drives the economy is whether or not people have confidence in the direction the economy is taking. Generally speaking, if consumers and business owners feel positive about the future of their own economic then they will spend for the future. If they aren’t then they won’t. Either way, the economy will sink or swim accordingly. In reality, of course, it’s a bit more complicated than that, of course, especially in the international economic world that we live — speaking of which, The Washington Post the shutdown and recent signs of economic weakening in China is reporting that are raising doubts about the direction of the global economy — in which what happens across the globe has an inevitable influence on what happens here at home. That being said, though, it’s the state of the domestic economy, and the public’s perception of their own economic situation, that has the biggest impact on the direction of the economy. The longer this shutdown goes on, the more likely it is that the public will become pessimistic, and the more likely it is that this will start to show up in the economy as a whole as this public perception becomes, in effect, a self-fulfilling prophecy. The one advantage of that is that, just maybe, this will prompt Washington to act to end this thing. Until then, there’s no end in sight. 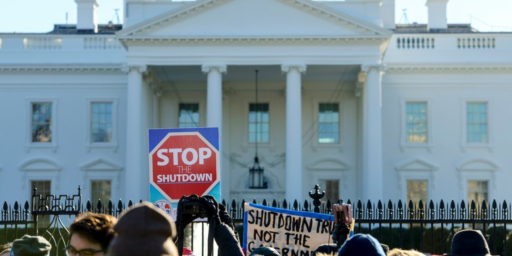