Shockingly, the "Springfield" in the long-running sittcom "The Simpsons" is Springfield, Oregon, near where creator Matt Groening grew up. 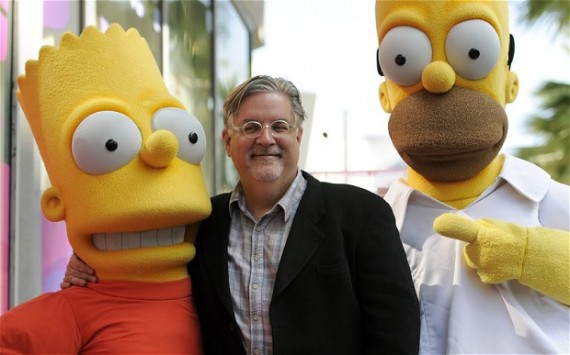 Shockingly, the “Springfield” in the long-running sittcom “The Simpsons” is Springfield, Oregon, near where creator Matt Groening grew up.

The Springfield that exists in the mind of Matt Groening is a kind of American everything — hick pit stop, rosy-cheeked Rockwellian font of family values, cesspool of corruption, ethnic melting pot, boomtown gone to rust.

It’s what the creator of “The Simpsons,” the nation’s longest-running sitcom, used as a backdrop for 22-minute allegories about the American experience, beginning as earnest tales about a lower-middle class nuclear family and expanding to encompass spoofs of presidential elections, the obesity epidemic and “Citizen Kane.”

It’s also, according to an interview posted online Tuesday, a real place. Groening told Smithsonian magazine that he was inspired by the television show “Father Knows Best,” which was set in a town called Springfield. Springfield, Ore., is 100 miles south of Groening’s hometown of Portland.

“When I grew up, I realized it was just a fictitious name,” Groening said. “I also figured out that Springfield was one of the most common names for a city in the U.S. “In anticipation of the success of the show, I thought, ‘This will be cool; everyone will think it’s their Springfield,'” he said. “And they do.”

The acknowledgement ends one of the longest-running mysteries in popular culture. But people in town on Tuesday weren’t quite sure what to do with the information.

Maybe we should have known all along, said Wayne Jones, a 28-year-old clerk at the Bright Oak Meats in downtown Springfield. Jones has long argued that Oregon’s Springfield is the true inspiration for Groening’s invention.

The fictional town’s true location has been a secret so long, even the jokes about its secrecy are old. In one, the showrunners had a narrator give one location in a voiceover for the live broadcast, then change it in reruns. In “The Simpsons Movie,” one character says the fictional state borders Ohio, Nevada, Maine and Kentucky.

Groening said he has long given fake answers when asked about the Simpsons’ hometown, leaving open the possibility that his latest one is itself another fake.

Until Tuesday, Portland, Ore., provided the most likely inspiration for the Simpsons’ hometown. Many of the names of characters on the Fox show — Flanders, Quimby, Kearney — are streets in Portland.

Not to mention that the main characters are named after Groening’s family, that the Simpsons address is identical to that of Groening’s childhood home, and about ten thousand other clues. Seriously, this stumped people for 25 years?